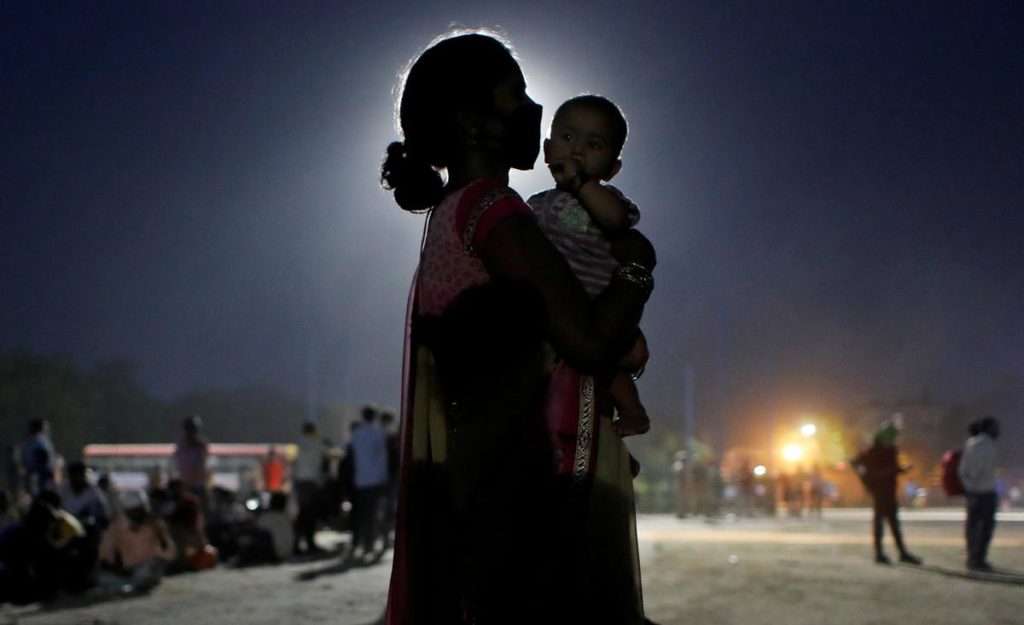 (Reuters) – Coronavirus cases in India reached 100,000 on Tuesday, matching its number of intensive care beds, and the rate of increase of new infections showed little sign of slowing.

A woman and her baby wait for a bus to take them to a railway station to board a train to their home state of Uttar Pradesh, after a limited reopening of India’s giant rail network following a nearly seven-week lockdown to slow the spreading of the coronavirus disease (COVID-19), in Ghaziabad in the outskirts of New Delhi, India, May 18, 2020. REUTERS/Adnan Abidi

India’s number of cases has easily outstripped that of China, where the virus emerged late last year and which has been one of Asia’s infection hot spots.

China has reported nearly 83,000 cases but has kept its daily rise in new infections to single digits for the past week.

In contrast, new cases in India have risen by an average of more than 4,000 a day over the past week, according to a Reuters tally based on official data, despite a severe weeks-long lockdown.

India officially extended the lockdown on Sunday to May 31, although several states indicated they would allow businesses to reopen.

Health experts and officials are worried about the strain the epidemic is placing on India’s over-stretched and under-funded hospital system.

Chaudhry warned there was not sufficient infrastructure or staff in the country of 1.35 billion people to handle a sharp spike in the number of critical patients.

While not every coronavirus patient needs an ICU bed, health experts worry about surging cases in India, particularly as many believe the official tally falls short of the reality.

India has not provided a detailed breakdown on the condition of people who have been diagnosed with COVID-19, the disease caused by the virus, although authorities have reported that about 37,000 people have recovered.

India’s death rate is less than that of some other big countries, at 3%, compared with about 6% for the United States, where some 89,000 people have died, and 14% for Britain.