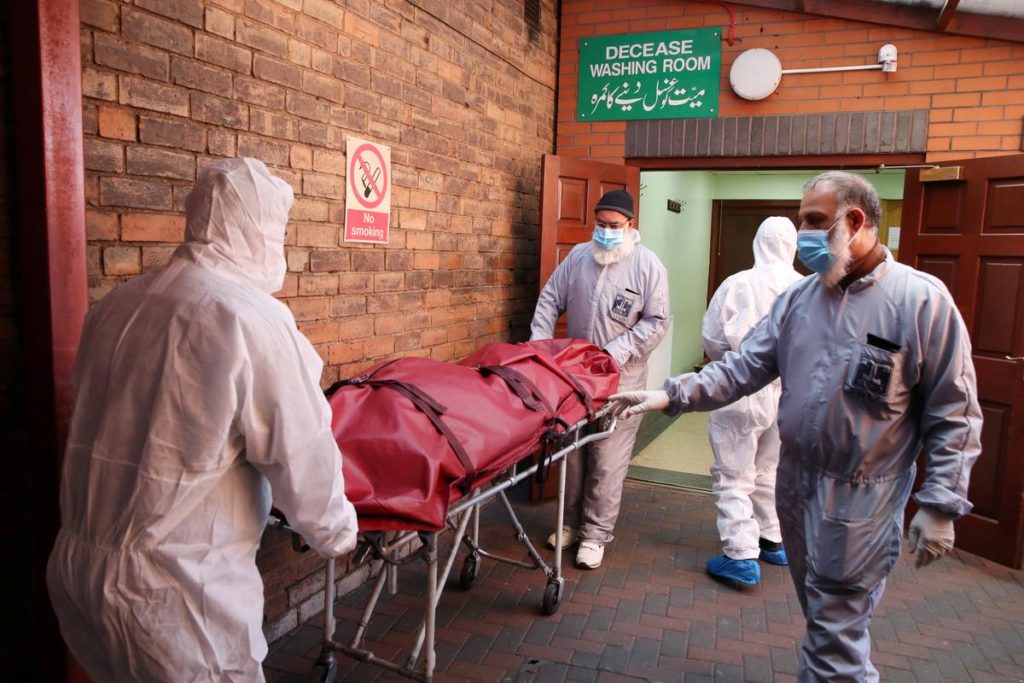 FILE PHOTO: Workers wearing protective equipment transport a body on the grounds of the Central Jamia Mosque Ghamkol Sharif, where a temporary morgue was set up as the coronavirus continues to spread in Birmingham, Britain, April 21, 2020. REUTERS/Carl Recine

North America and European countries accounted for most of the new deaths and cases reported in recent days, but numbers were rising from smaller bases in Latin America, Africa and Russia.

That easily exceeds the estimated 140,000 deaths worldwide in 2018 caused by measles, and compares with around 3 million to 5 million cases of severe illness caused annually by seasonal influenza, according to the World Health Organization (WHO).

While the current trajectory of COVID-19 falls far short of the 1918 Spanish flu, which infected an estimated 500 million people, killing at least 10% of patients, experts worry the available data is underplaying the true impact of the pandemic.

The concerns come as several countries begin to ease strict lockdowns that have been credited with helping contain the spread of the virus.

“We could easily have a second or a third wave because a lot of places aren’t immune,” Peter Collignon, an infectious diseases physician and microbiologist at Canberra Hospital, told Reuters. He noted the world was well short of herd immunity, which requires around 60% of the population to have recovered from the disease.

The first death linked to COVID-19 was reported on Jan. 10 in Wuhan, China, after the coronavirus first emerged there in December. Global fatalities grew at a rate of 1-2% in recent days, down from 14% on March 21, according to the Reuters data.

Collignon said any country with a mortality rate of more than 2% almost certainly had underreported case numbers. Health experts fear those ratios could worsen in regions and countries less prepared to deal with the health crisis.

“If your mortality rate is higher than 2%, you’ve missed a lot of cases,” he said, noting that countries overwhelmed by the outbreak were less likely to conduct testing in the community and record deaths outside of hospitals.

In the United States, around half the country’s state governors partially reopened their economies over the weekend, while others, including New York Governor Andrew Cuomo, declared the move was premature.

In Britain, Prime Minister Boris Johnson, who battled COVID-19 last month, has said the country was over the peak but it was still too early to relax lockdown measures.

Even in countries where the suppression of the disease has been considered successful, such as Australia and New Zealand which have recorded low daily rates of new infections for weeks, officials have been cautious.