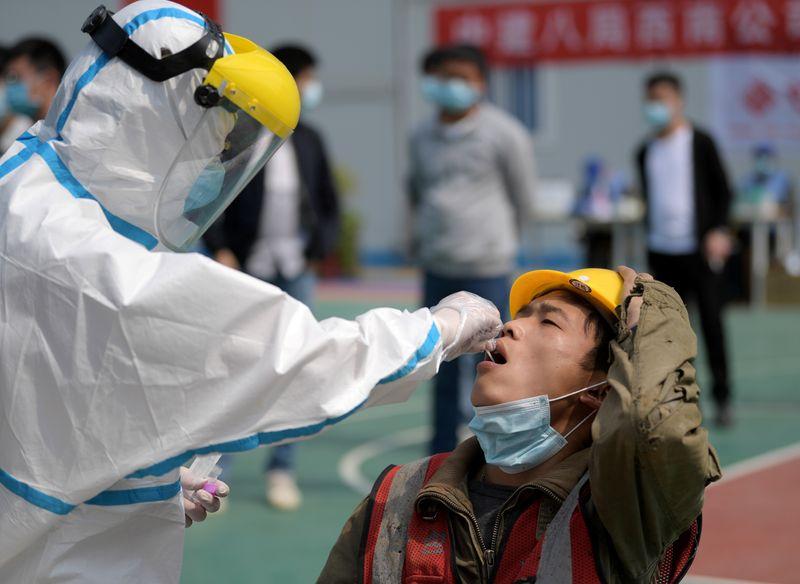 Getting a coronavirus test in Wuhan: fast, cheap and easy

WUHAN, China (Reuters) – Coronavirus tests can be difficult to come by in many countries including in hard-hit parts of the United States and Britain, but in Wuhan, the Chinese epicentre of the pandemic, they are fast, cheap and easy to get.

FILE PHOTO: A worker in a protective suit collects a swab from a construction worker for nucleic acid test in Wuhan, Hubei province, the epicentre of the novel coronavirus disease (COVID-19) outbreak in China, April 7, 2020. China Daily via REUTERS

My colleagues and I had just arrived in the central city where the novel coronavirus emerged in humans late last year, and as a foreigner I was told that I was required to take a nucleic test to prove that I was free of the potentially deadly flu-like virus.

A government official escorted me to the test site, a table outside the entrance of a shuttered hotel. A single medical worker sat there, dressed in a zipped-up hazmat suit and goggles.

She asked for my personal details and told me to sit. She then stuck a swab down my throat, nearly triggering a gag, and then it was over.

“You’ll get your results in about one and a half days,” the official said.

The test, while not pleasant, took less than three seconds.

Wuhan is testing liberally as it tries to get back up and running after lifting a 76-day lockdown last week.

The term “nucleic acid test” has become a familiar one in the city of 11 million people, where many companies are asking workers to present test results before they can return to work, although it is not mandatory.

At one Wuhan hospital, people only need to spit into a test tube. That test costs 260 yuan ($37) and results are available by mobile app. Since Feb. 21, 930,315 tests have been carried out in Wuhan, according to government data.

“If you’re an enterprise with 500 employees and you want to start working again, you test everybody.”

Across China, officials are simplifying and speeding up the process to obtain a nucleic acid test, even though questions persist about its accuracy.

Some Chinese doctors have pushed to raise requirements for discharging hospitalised patients from two negative nucleic acid tests to three.

Cities including Beijing have required some arriving travelers to present test results when entering. China has not yet indicated it will require testing for large swathes of the population.

The official sent my test result to me by text message. It was negative.