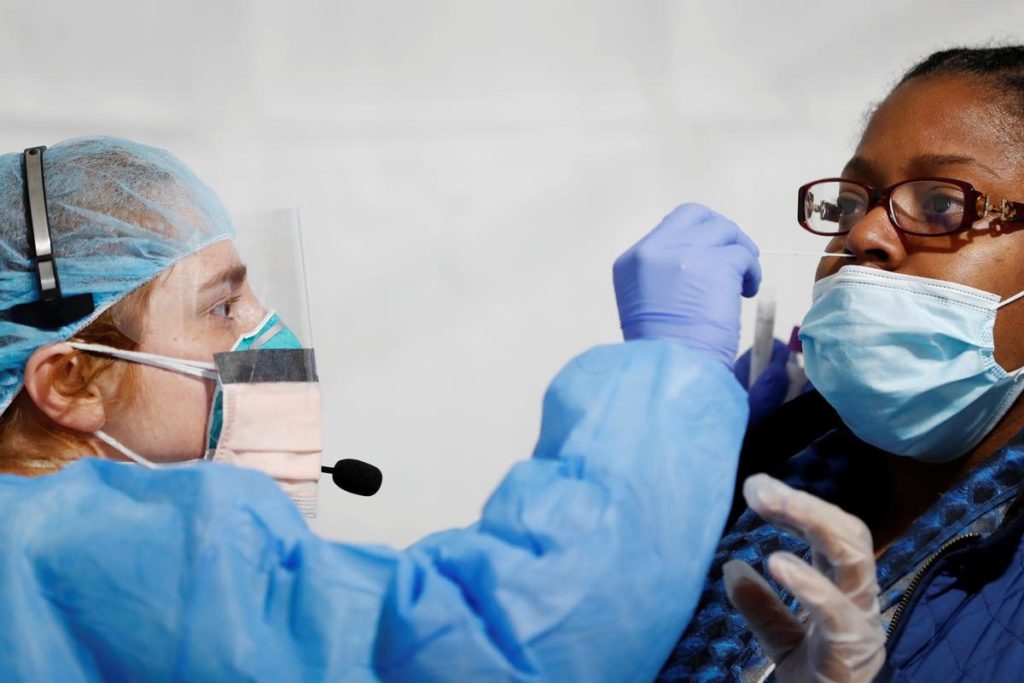 Georgia, other U.S. states press ahead with early coronavirus reopening

ATLANTA (Reuters) – Governors of about half a dozen U.S. states are pushing ahead with plans to begin a partial restart of their economies despite warnings that loosening restrictions prematurely could lead to a fresh surge of coronavirus infections and loss of life.

The move toward reopening in Georgia, South Carolina and other states follows a series of protests in Michigan, Pennsylvania and elsewhere to demand a rollback on orders that have shut down business and social life to fight the pandemic.

In some other, harder-hit states, tensions between President Donald Trump and governors have intensified over the federal government’s role in solving a persistent shortage of testing, seen by experts as a prerequisite for reducing exposure and enabling a safe reopening.

Governor Andrew Cuomo of New York, which accounts for nearly half of the coronavirus deaths in the United States, was due to discuss the testing issue during a White House meeting with Trump on Tuesday afternoon.

“It’s a matter of concern, this whole idea of opening up. It’s based on non-science generated parameters,” said Dr. Boris Lushniak, dean of the University of Maryland School of Public Health.

Lushniak said Georgia had shown only seven days of declining cases instead of the 14 days required by federal guidelines.

Health authorities say the United States should test roughly 3 million people each week to get an accurate sense of the virus’s reach, but states tested only 1 million over the past seven days, according to the Covid Tracking Project.

“We’ve got to get more testing done before we make any public health decisions. … We’ve got to get better at this. Our hands are tied without this testing,” Lushniak said.

In the U.S. Congress, leading lawmakers said on Tuesday they were very close to announcing an agreement with the Trump administration on a new coronavirus economic relief deal worth more than $450 billion, and the White House has signed off on a national testing strategy.

Georgia is among a half dozen states that will allow more business activity this week or next.

Kemp described his plan as a measured approach that balances the need to reignite the state’s economy with the need to assure public health, saying such steps as stay-home orders and social distancing would remain in place to stanch the outbreak.

Georgia has reported 174,000 positive cases and six deaths per 100,000 people, both below the national average, according to a Reuters analysis of data collected by the Covid Tracking Project. But the state has one of the lowest testing rates, ranking 42nd out of the 50 states and the District of Columbia, giving health officials less data on the reach of the illness to base decisions on reopening, the data showed.

Mayor Van Johnson of Savannah, Georgia, was also critical of Kemp. “Don’t go out,” Johnson urged residents during a televised news conference. “People will not come here if they think our businesses are not safe.”.

People would be at close quarters in movie theaters and restaurants and “there’s no way that hair, nails, massages and tattoos can be done at a safe distance.”

Lindsey Leinbach takes a swab to test for the coronavirus at a One Medical testing facility built to help with the coronavirus disease (COVID-19) outbreak, in the Bronx borough of New York City, U.S., April 21, 2020. REUTERS/Lucas JacksonCUOMO TO MEET TRUMP

Testing was on the mind of New York’s governor as he prepared to meet U.S. President Donald Trump at the White House on Tuesday at 4 p.m. (2000 GMT).

“I am heading to the White House to meet with President Trump to address testing,” he said on Twitter. “We need partnership between the states and the federal government. We will work together to ensure a safer, stronger future for everyone.”

New York accounts for nearly half of the coronavirus deaths in the United States, the most in the world, according to a Reuters tally. U.S. deaths were approaching 44,000 and 800,000 cases.

Although the outbreak appears to be past its peak in New York, Cuomo has insisted on a go-slow approach to reopening.

New York City Mayor Bill de Blasio on Tuesday said Trump could “kiss his re-election goodbye” in November’s vote if he did not address the shortage of testing supplies and provide more federal financial assistance to cities and states.

Barbara Anderson, 64, of North Myrtle Beach, South Carolina, said: “I feel it’s a little soon to get everything open.

“I do look forward to getting some things open: to walking on the beach and getting the fresh air. We will still take our precautions. I will still wear my mask when I go to the grocery store,” she said.

Texas Governor Greg Abbott, with the second-largest economy in the country, is moving toward reopening but said it would be gradual – and reversed if any outbreaks occurred.

Abbott was expected to announce more openings for the economy on April 27, largely based on how this week goes following some retail starting on April 24 and with state parks reopened on Monday.

The orders Abbott issued last Friday also loosen what medical procedures can be done. Those that do not deplete hospital capacity or the personal protective gear needed to battle coronavirus would be allowed to resume next Tuesday.