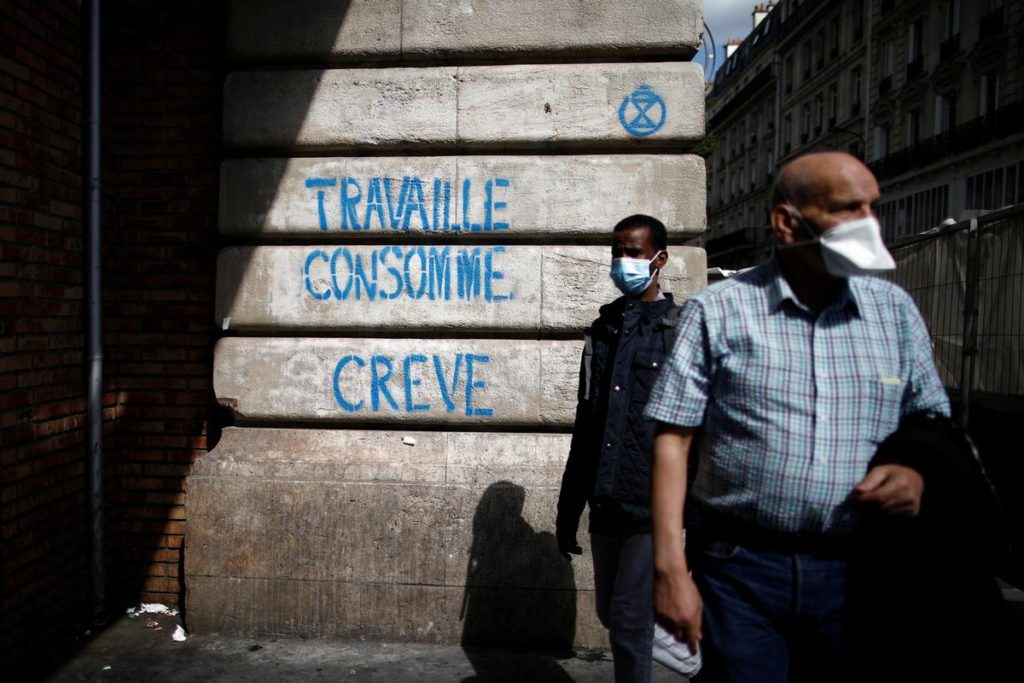 FILE PHOTO: People wearing protective face masks walk past the slogan which reads: “Work, Buy, Die” written on a wall in Paris, following the outbreak of the coronavirus disease (COVID-19) in France, May 25, 2020. REUTERS/Benoit Tessier

PARIS (Reuters) – France again ranked fourth in coronavirus deaths after the United States, Britain and Italy, as Spain revised its tally down by nearly 2,000 on Monday.

The ministry could not be reached for comment about the discrepancy, but both numbers put the French toll at about 1,600 higher than Spain’s 26,834 and well below Italy’s nearly 33,000.

France’s death toll was slightly higher than Spain’s between May 12 and May 21, but at the end of last week it dipped below Spain’s again for three days.

France also reported on Monday that the number of confirmed coronavirus cases rose by 358, or 0.2%, to 145,279, in line with the rate of the second half of last week and slower than the week before, raising hopes that the worst of the epidemic is over in France.

“The virus is finding it increasingly difficult to spread. At some point it does not find enough people who are susceptible to infection,” epidemiologist Laurent Toubiana, director of the IRSAN health data institute, said in an interview.

The total number of confirmed and probable cases, which stood at over 180,000 last week, could not be calculated as the ministry has not updated its nursing home data for several days.

The ministry said earlier in a statement that the number of patients in hospital with coronavirus fell by 387 to 16,798 on Monday, resuming a gradual decline that had been interrupted on Sunday. Intensive care patients decreased by 46 to 1,609, continuing a six-week downtrend.