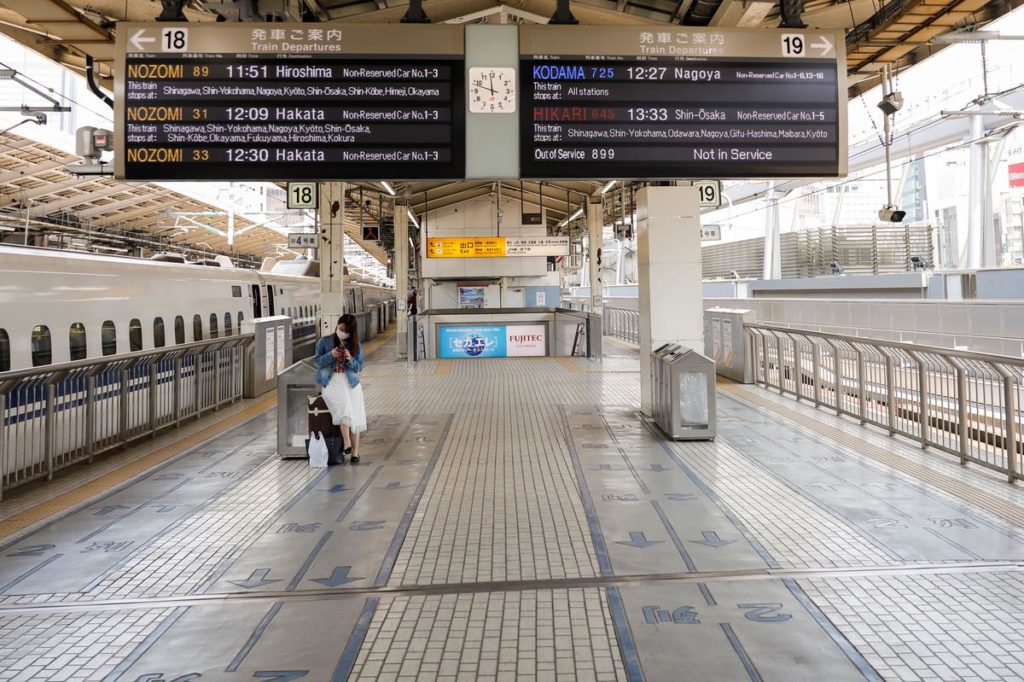 Factbox: Latest on the worldwide spread of the new coronavirus

(Reuters) – More than 3.29 million people have reportedly been infected by the novel coronavirus globally, and 232,806 have died, according to a Reuters tally as of 1400 GMT on Friday.

A passenger wearing a face mask waits for a train on an almost empty platform of Tokyo station where fewer people than usual are seen during Golden Week holidays following the coronavirus disease (COVID-19) outbreak, in Tokyo, Japan, April 29, 2020. REUTERS/Kim Kyung-Hoon

* The United Kingdom’s death toll from COVID-19 rose to 27,510, an increase of 739, according to figures that include deaths in hospital and in other settings like nursing homes.

* Confirmed coronavirus cases in Germany increased by 1,639 to 160,758, data from the Robert Koch Institute for infectious diseases showed.

* Russia reported a record daily rise in confirmed coronavirus cases, a day after Prime Minister Mikhail Mishustin announced he had been diagnosed with the new virus and was temporarily stepping down to recover.

* The Netherlands’ number of confirmed coronavirus cases has risen by 475 to 39,791 health authorities said, with 98 new deaths.

* Death toll in Italy climbed by 269, the Civil Protection Agency said, while the daily tally of new infections stood at 1,965.

* Hungary needs to prepare for a potential second wave of coronavirus cases in October and November after a likely slowdown in the outbreak’s infection rate in the summer, the prime minister told state radio.

* Britain’s financial watchdog said it would urgently ask the courts to clarify uncertainty over whether businesses can claim compensation for disruption caused by the pandemic.

* More than 1.07 million people have been infected with the new coronavirus in the United States and 62,891 have died, according to a Reuters tally as of 0200 GMT on Friday.

* Nearly every business in Georgia was free to reopen on Friday after being shut for weeks, in a move closely watched by the U.S. government and other states to see if the lifting of restrictions triggers a spike in coronavirus deaths.

* U.S. President Donald Trump said on Thursday his hard-fought trade deal with China was now of secondary importance to the coronavirus pandemic and he threatened new tariffs on Beijing, as his administration crafted retaliatory measures over the outbreak.

* Canada’s coronavirus curve is flat but worrying trends are emerging, according to its top medical officer.

* Brazil reported a record 7,218 cases in the last 24 hours and 435 additional fatalities.

* China’s central province of Hubei, where the novel coronavirus behind the pandemic was first detected, will lower its emergency response level from Saturday in the latest relaxation of lockdowns put in place to contain the virus.

* Malaysia reported 69 new coronavirus cases, bringing the total number of infections in the country to 6,071.

* The Philippines on Friday reported 284 new coronavirus infections and 11 more deaths, bringing its total number of cases to 8,772 and fatalities to 579.

* Afghanistan, beset by a poor healthcare system, malnutrition, war and other vulnerabilities, likely is facing a “health disaster” from the coronavirus, a watchdog report to the U.S. Congress warns.

* Malaysia will allow majority of businesses to resume operations from May 4.

* The Rwandan government will allow limited movement of people and allow restricted openings of businesses including restaurants and hotels from next Monday as it starts to ease its coronavirus lockdown.

* Zimbabwe’s President Emmerson Mnangagwa extended a nationwide lockdown to fight the new coronavirus by two more weeks and announced a $720 million stimulus package for distressed companies, most which will be allowed to reopen on Monday.

* Britain’s housing market is grinding to a halt as a result of the government’s coronavirus lockdown, mortgage lender Nationwide said.

* Irish manufacturing activity suffered its sharpest monthly decline on record in April as output collapsed, while British factory output risks falling by more than half during the current quarter, a trade body said.

* South Korean exports plunged at their sharpest pace since the global financial crisis in April.

* Consumer prices in Japan’s capital city fell for the first time in three years in April and national factory activity slumped, increasing fears that the pandemic could tip the country back into deflation.

* France suffered its sharpest economic contraction since records began in 1949 in the first quarter.

* Democratic Republic of Congo has cut its 2020 economic growth forecast to -1.9% and is expecting its economy to contract, its central bank said.

* Chile’s unemployment rate rose to 8.2% in the first quarter from the same period a year ago, hitting a decade high.

Compiled by Vinay Dwivedi and Uttaresh.V; Editing by Sriraj Kalluvila and Shounak Dasgupta