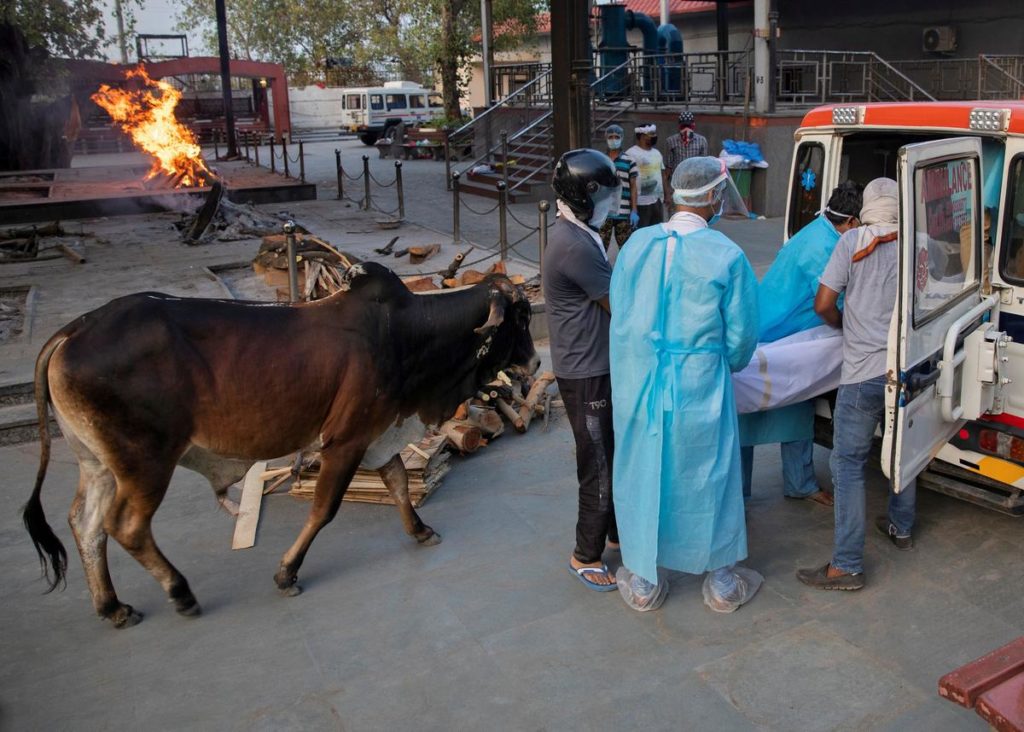 (Reuters) – A second wave of the coronavirus could derail efforts by governments to reopen economies and ease lockdown restrictions. Here is a rundown of countries and regions with the highest infection rates and measures taken to curb infection rates.

Relatives and health workers unload the body of a man who died due to the coronavirus disease (COVID-19) for his cremation at a crematorium in New Delhi, India, June 11, 2020. REUTERS/Danish Siddiqui

Since India started gradually easing lockdowns of its 1.3 billion people imposed in March, the pace of the virus spread has accelerated sharply.

India has reported roughly 10,000 new infections daily over the last week and the country’s case count surpassed Britain on Friday, making it the fourth most affected country globally.

The western state of Maharashtra, home to financial hub Mumbai, has been the hardest hit with roughly a third of all cases in India. With nearly 100,000 cases, Maharashtra alone has recorded more infections than all of China.

New cases have surged in Pakistan since the government lifted lockdowns on May 9 citing economic pressure. It has reported record number of new infections since early June, also partly due to increased testing.

Of 23,000 daily tests, more than one in five have been positive over the last 10 days. Before the lockdown was lifted the number of positive tests was approximately 1 in 10, government statistics show.

The World Health Organization recommended this week that Pakistani authorities reimpose “intermittent lockdowns” of targeted areas, saying the country did not meet the WHO’s conditions for lifting restrictions.

Coronavirus cases keep rising across the world’s fourth most populous nation. The country reported 1,241 new cases on Wednesday, its biggest daily rise for a second successive day, and added 979 new cases on Thursday.

South Korea and Singapore, which drew attention for what was seen as success in containing the early stages of the outbreak, experienced fresh outbreaks in recent months, showing how easily the virus may return.

In early May, a cluster of new infections linked to nightclubs and bars in Seoul’s Itaewon district raised concerns of a second wave, prompting the government to close some nightclubs and bars again and to delay the planned reopening of schools by a week.

New cases in the country have persisted in the mid-double digits daily, after a series of new clusters in the Seoul area. The government said on Friday it will indefinitely extend intensive prevention and sanitation guidelines until the daily number drops to single digits.

Singapore has the highest number of cases in Southeast Asia due to outbreaks in cramped dormitories housing thousands of migrant workers.

It reopened schools and some businesses in early June but has said it will ease other restrictions gradually as at least half of newly discovered cases are in people showing no symptoms.

About half a dozen states including Texas and Arizona are grappling with a rising number of coronavirus patients filling hospital beds and some are beginning to run short on intensive care unit beds. A recent surge in cases partially reflects increased testing.

COVID-19 deaths continue to increase in many U.S. states. Fears about a second wave grew late last month as Americans traveled to beaches and lakes to celebrate the Memorial Day long weekend.

Protests across the country over the death of African American George Floyd in Minneapolis have stoked those worries.

Russia, which has the third-largest number of confirmed cases globally, reported 8,779 new cases on Thursday. The country says it has a high number of cases due to its widespread and comprehensive testing regime.

It lifted a lockdown imposed on Moscow for more than two months on Tuesday even though the capital is still reporting over 1,000 cases daily.

It reported 30,412 new cases on Thursday, bringing its cumulative total to above 800,000, the second highest after the United States.

Shops in the country’s two largest cities, epicenter of a still surging epidemic in Brazil, reopened on Thursday, just a day after the most populous state Sao Paulo reported a record number of COVID-19 deaths for the second day.

The initial wave of transmission has passed its peak everywhere except for Poland and Sweden, according to an analysis by the European Centre for Disease Prevention and Control.

But the risk of a second wave big enough to require lockdowns to be reimposed is moderate to high, it said, and fending it off will depend on the gradual easing of restrictions and how people stick to them.

In Britain, one of the worst hit countries, Prime Minister Boris Johnson said on Wednesday the rate of infection was slowing to “manageable levels” but cautioned restrictions could re-imposed. By Tuesday the death toll neared 52,000, according to a Reuters tally of official data sources.

French President Emmanuel Macron is due to address the nation on Sunday to discuss the next steps of a lockdown, a month after restrictions started to be lifted. With the French economy expected to contract by 11% in 2020, many, including in the government, are calling for a quick return to normal.

Compiled by Josephine Mason and Alistair Smout in London, Miyoung Kim in Singapore and Matthias Blamont in Paris; Editing by Frances Kerry

Previous Post Study Will Assess Drugs Used to Treat Young COVID-19 Patients Next Post For Patients, Promise and Challenges Ahead