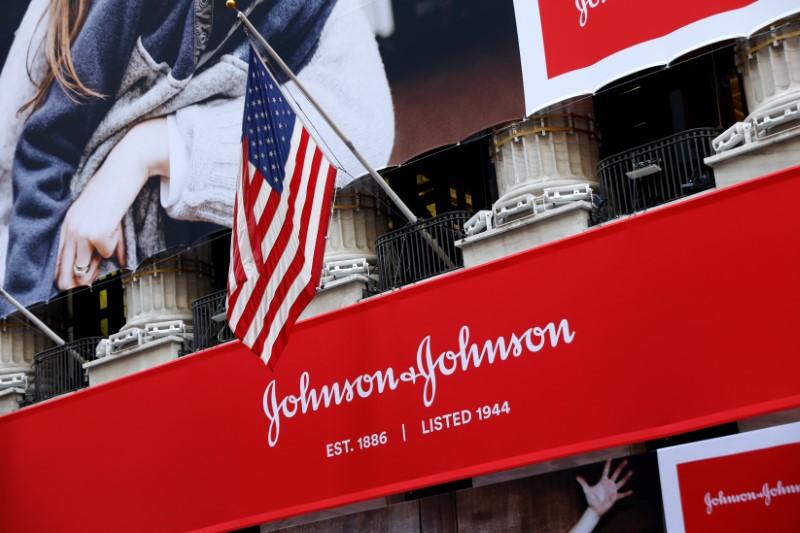 BRUSSELS (Reuters) – The European Commission is in advanced talks with pharmaceuticals giant Johnson & Johnson (JNJ.N) to reserve or make an up-front purchase of its COVID-19 vaccine under development, two officials familiar with the talks told Reuters.

FILE PHOTO: The U.S. flag is seen over the company logo for Johnson & Johnson to celebrate the 75th anniversary of the company’s listing at the New York Stock Exchange (NYSE) in New York, U.S., September 17, 2019. REUTERS/Brendan McDermid

The move would be the first arranged by the European Union executive since it was mandated by the 27 EU national governments to use an emergency fund of more than 2 billion euros ($2.3 billion) to strike deals with up to six vaccine producers.

The Commission’s deal with U.S. company Johnson & Johnson is “in the pipeline”, a top health official from an EU member state said, asking to remain anonymous because the talks were confidential discussions about vaccines between the EU executive and EU governments.

A second EU source said the Commission had a call with Johnson & Johnson on Tuesday about the possible agreement.

In response to Reuters’ queries, Johnson & Johnson said it is in talks with multiple governments and global organisations as it seeks to develop a COVID-19 vaccine but declined to comment further.

It was unclear whether any deal would involve an advance purchase of the vaccine in testing or an option to buy it.

Johnson & Johnson plans to start human clinical trials next month for its experimental vaccine against the highly contagious coronavirus, which has infected more than 8.36 million people worldwide and led to 447,985 deaths.

Germany, France, Italy and the Netherlands last week said that they had acquired 400 million potential vaccine doses – in principle available to all member states – from British drugmaker AstraZeneca (AZN.L), which is developing a COVID-19 shot in conjunction with Oxford University.

AstraZeneca signed a similar deal in May with the United States.

The health official source said the EU deal with Johnson & Johnson could be announced as early as next week, but cautioned that it might take a little longer to finalise and there is a chance it might not be struck at all.

He said the EU is also seeking a deal with French vaccine-maker Sanofi (SASY.PA). A spokesman for Sanofi had no immediate comment.

EU decision-making procedures pose a potential sticking point, with member states still in talks over the establishment of a steering board for vaccine negotiations with drugmakers, officials told Reuters.

But underlining the urgency of securing a vaccine for the EU’s 450 million population, the Commission had already begun talks with Johnson & Johnson even before the steering board has been agreed.

The Netherlands has also been involved in these initial talks with Johnson & Johnson, as a representative of the alliance of the four EU countries that struck the AstraZeneca deal, officials told Reuters.

This alliance is expected to halt negotiations with drugmakers once the EU has appointed its negotiation team, to avoid competition among EU states, officials said.

“Johnson and Johnson’s vaccine is one of the promising initiatives,” a spokesman for the Dutch health ministry said, declining to comment on the ongoing talks.

By buying vaccines under development, the EU risks acquiring shots that may eventually prove unsuccessful against COVID-19.

But the risk is justified by the need to secure enough doses for the EU population in the global race for an effective vaccine, EU officials say.