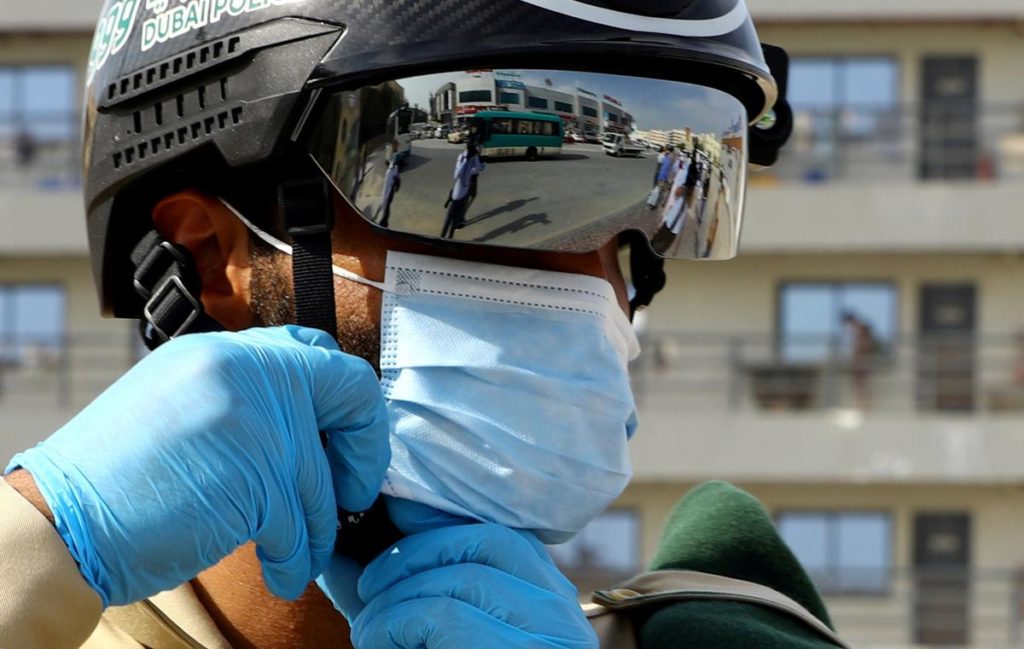 DUBAI (Reuters) – Police in the United Arab Emirates are deploying smart helmets that can scan the temperatures of hundreds of people every minute in their effort to combat the new coronavirus.

A police officer wears a smart helmet as he uses it to test the temperature of the workers during the outbreak of the coronavirus disease (COVID-19) in Dubai, United Arab Emirates April 23, 2020. REUTERS/Ahmed Jadallah

The helmets, which need less time and less contact than traditional thermometers, can measure temperatures from five metres (16 ft) away and scan up to 200 people a minute, triggering an alert if a fever is detected.

Chinese company KC Wearable says it has sold more than 1,000 of the temperature scanning helmets and has received orders from the Middle East, Europe and Asia.

“We’ve implemented the smart helmet during this time of crisis, with COVID-19, across all police stations in Dubai, as well as at patrolling stations whose duty requires them to be on the frontline,” police officer Aly al-Ramsy told Reuters.

“In the case of someone with a high temperature, we take the necessary measures to stop the person … and then the person is dealt with by paramedics and taken to the closest medical facility.”

Dubai police are using the helmets to screen people in densely populated areas, including sealed off neighbourhoods.

Gulf Arab states have ramped up testing after recording a growing number of cases among low-income migrant workers in overcrowded housing.

The UAE has the second highest infection count among the six Gulf states, with more than 8,000, and over 50 deaths. It does not provide a breakdown for each of its seven emirates.

Like other countries around the world, Gulf states have deployed technology in the struggle to rein in the virus, including smartphone apps that track sufferers. Civil liberties groups have criticised such apps as an invasion of privacy.

Previous Post Lots of Drugs Are Being Tested Against COVID-19 — But Will Any Work? Next Post Rapid Coronavirus Test Can Produce False Negatives