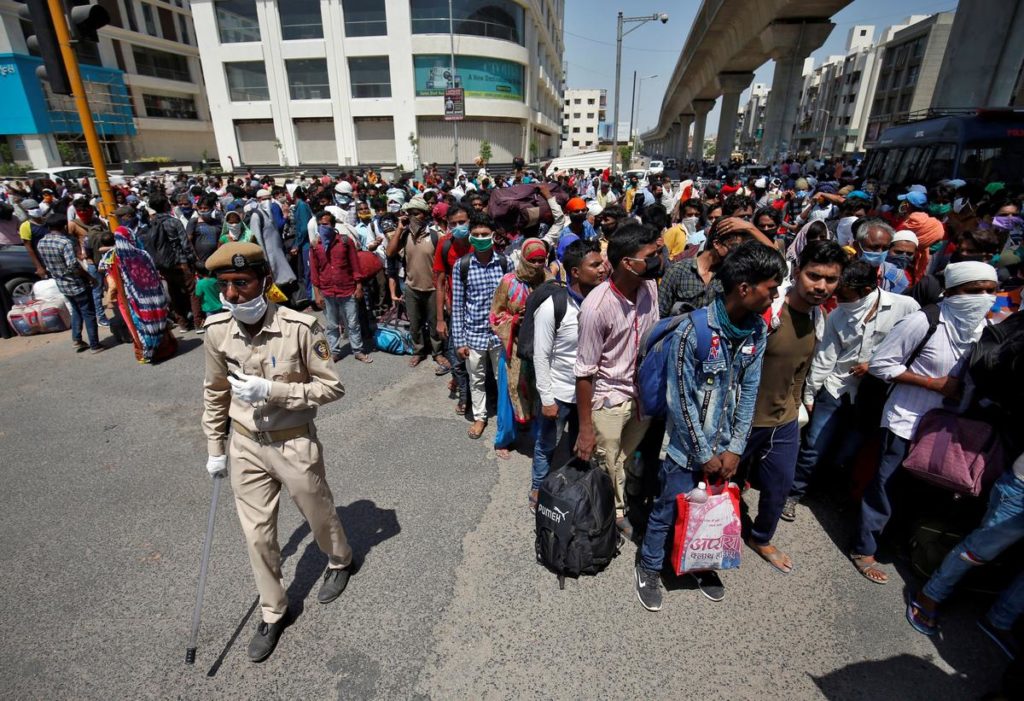 NEW DELHI (Reuters) – India has lost two weeks in its bid to get a picture of the spread of the coronavirus in its population because of poor Chinese testing kits, a member of a national task force said, complicating a decision on opening up from a lockdown.

A policeman stands past migrant workers and their families waiting for transport to reach to a railway station to board trains to their home states, after a limited reopening of India’s giant rail network following a nearly seven-week lockdown to slow the spreading of the coronavirus disease (COVID-19), in Ahmedabad, India, May 15, 2020. REUTERS/Amit Dave

The kits were for antibodies to the virus, meaning authorities could determine who had been exposed to it as part of a broad survey to assess its spread.

But hundreds of thousands of kits had to be returned to China after inconsistent results, and the government does not have all of the data it should have to decide on how and when to loosen the lockdown, first imposed on March 25.

“We would have known the extent of infections, how much is the spread, about two weeks back. The delay is about two weeks,” Dr Manoj Murhekar, a task force member and director of the National Institute of Epidemiology, told Reuters on Thursday.

A survey of 24,000 people was now underway with indigenously developed test kits and data would be available by the end of May, he said.

Two members of a research group advising the government said the delay caused by the inconsistent Chinese kits was longer than two weeks.

Two other members of the group said another factor that has hindered the collection of the data is that health authorities have been more focused on testing high-risk groups and containment, and slow in efforts to mount systematic surveillance.

“Without surveillance data, you are really flying blind,” one of the members said.

All four experts declined to be identified, some citing a government rule not allowing public comment.

The health ministry said this week systematic surveillance was starting in selected districts.

It did not respond to queries from Reuters.

China criticised India’s complaint about the kits as unfair and irresponsible, and said the tests needed to be carried out in a professional manner to produce accurate results.

‘GREEN’ AREAS ARE KEY Data from the survey across 60 districts will help authorities better understand the spread and concentration of infections and improve the response, the research group members said.

India’s cases of coronavirus reached 81,970 on Friday, with its tally likely to surpass that of China, where the coronavirus emerged late last year, later in the day.

More cases are expected as the government eases the stay-at-home restrictions on the 1.3 billion population.

To conduct the survey, India’s more than 700 districts will be divided into four groups depending on the number of confirmed cases, and 15 will be selected from each category, one of the members said.

Then, tests will be conducted in clusters, with 400 people from each of the 60 districts tested.

The survey should provide data that can be used to track the disease’s trajectory over time in a given area, or used to compare one area’s situation to another.

“This is the first thing you’re supposed to do,” one of the research group members said.

Murhekar said the data should show the spread of the virus, particularly in “green zones” – areas with no confirmed cases or none for 28 days – under the government’s colour-coding system.

“The main advantage would been in green areas. Are they really green?” Murhekar said.

After the 60 districts are surveyed, another 10 cities with the most number of infections would be assessed, he said.

While authorities await the delayed data, Murhekar said they still had the results from India’s tally of about 2 million people tested to categorise districts.

“It is not that we absolutely do not know anything about the transmission of the disease,” he said.