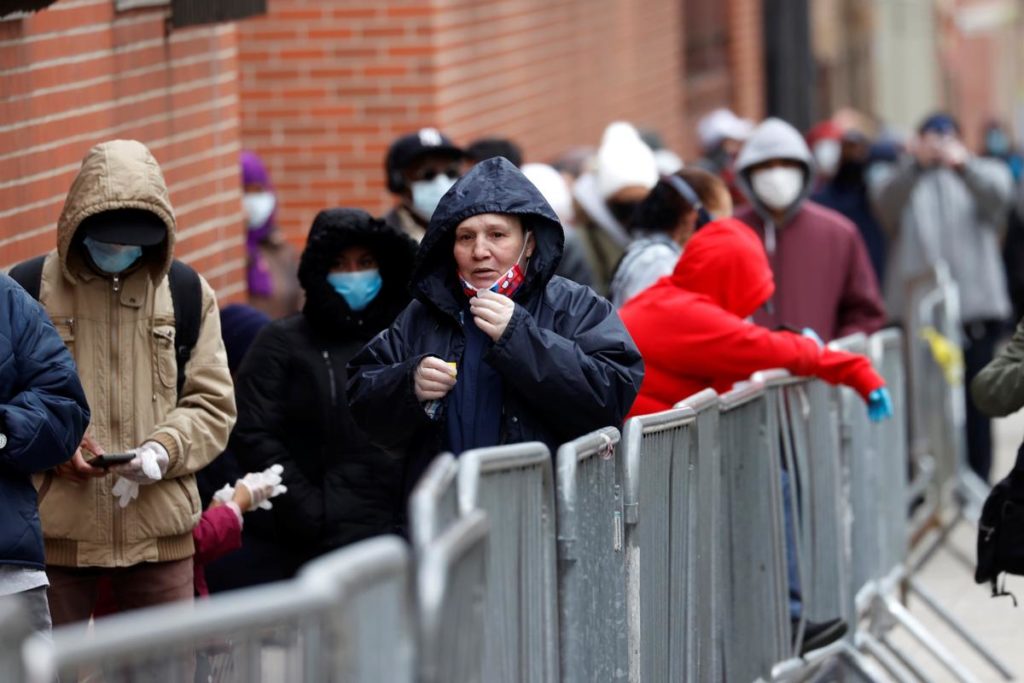 Debate over lifting of U.S. coronavirus lockdowns ramps up

HARRISBURG, Penn. (Reuters) – The U.S. debate intensified on Monday over when to lift restrictions to control the coronavirus outbreak, with protesters describing mandatory lockdowns as “tyranny” and New York’s governor and other officials urging caution until more testing becomes available.

Stay-at-home measures, which experts say are essential to slow the spread of the virus, have ground the economy to a virtual standstill and forced more than 22 million people to apply for unemployment benefits in the past month.

In Pennsylvania, where Democratic Governor Tom Wolf has promised to veto a Republican-backed bill that would force him to reopen some businesses, a few hundred protesters, most of them in cars, held a demonstration in the capital Harrisburg.

Many of the protesters expressed cynicism toward health experts and skepticism about the actual scale of the pandemic in the country, accusing officials of overreaching and taking actions that had caused more harm than the virus itself.

“All the projections were wrong, but we are still telling people to stay home and businesses to close. This is not quarantine, this is tyranny,” said Mark Cooper, a 61-year-old retired truck driver.

President Donald Trump, a Republican seeking re-election in November, has said state governors should have the final say but has favored an early end to the lockdowns, and many protesters in the past week have sported pro-Trump signs and campaign gear.

Republican lawmakers in several states have also backed the protesters, some of whom have failed to wear face masks and practice the social distancing that health officials say are key to getting the virus under control.

Joe Buchert, 48, a retired police officer who lives in Pottstown, Pennsylvania, attended the Harrisburg protest because he thinks the governor had overreached.

“The Democratic governors are just trying to kill the economy to hurt Trump,” said Buchert, who was wearing a red Trump 2020 hat.

In Washington, lawmakers in Congress were near an agreement for extra money to help small businesses hurt by the pandemic, a top Republican lawmaker said. The Trump administration sought to add $250 billion to a small-business loan program established last month as part of a $2.3 trillion coronavirus economic relief plan. That fund already has been exhausted.

Health experts and lawmakers on the front lines of the battle to curb the pandemic have warned that the country could face a second and even deadlier wave of infections if the lockdowns end prematurely.

The United States has by far the world’s largest number of confirmed coronavirus cases, with more than 753,000 infections and over 41,100 deaths, nearly half of them in the state of New York, according to a Reuters tally.

New York Governor Andrew Cuomo said testing capacity had to be ramped up and that reopening the economy in New York and other parts of the country would need to be calibrated carefully to prevent another surge in cases.

Earlier, New York City Mayor Bill de Blasio said it could take weeks if not months before the country’s most populous city reopens due to a lack of widespread testing, even as officials elsewhere began rolling back restrictions on daily life.

“The federal government is not stepping up,” de Blasio told a news conference. He said the city needed to be conducting hundreds of thousands of tests a day and to see hospitalizations decline further before reopening the economy.

Trump, who has sparred with a number of Democratic governors critical of his response to the health crisis, has said there were enough tests for COVID-19, the respiratory illness caused by the novel coronavirus.

In a series of tweets on Monday, Trump said governors had shifted from complaining about a scarcity of ventilators to griping about not having what they needed to ramp up testing capacity.

“Now they scream ‘Testing, Testing, Testing,’ again playing a very dangerous political game. States, not the Federal Government, should be doing the Testing – But we will work with the Governors and get it done.”

White House adviser Kellyanne Conway said the administration was focused on the testing issue and that Vice President Mike Pence, who is leading the White House response to the crisis, was discussing it with governors on Monday.

Residents in Florida were allowed to return to some beaches after Governor Ron DeSantis approved the relaxing of some restrictions.

Charlie Latham, mayor of Jacksonville Beach, said the beach there was reopened with limited hours, and it went well with no arrests for people violating social distancing rules which barred chairs and blankets.

“We thought that the public was ready to maintain the social distancing standards and to exercise good judgment. And it’s paid off, it’s paid off really well,” Latham told Fox News.