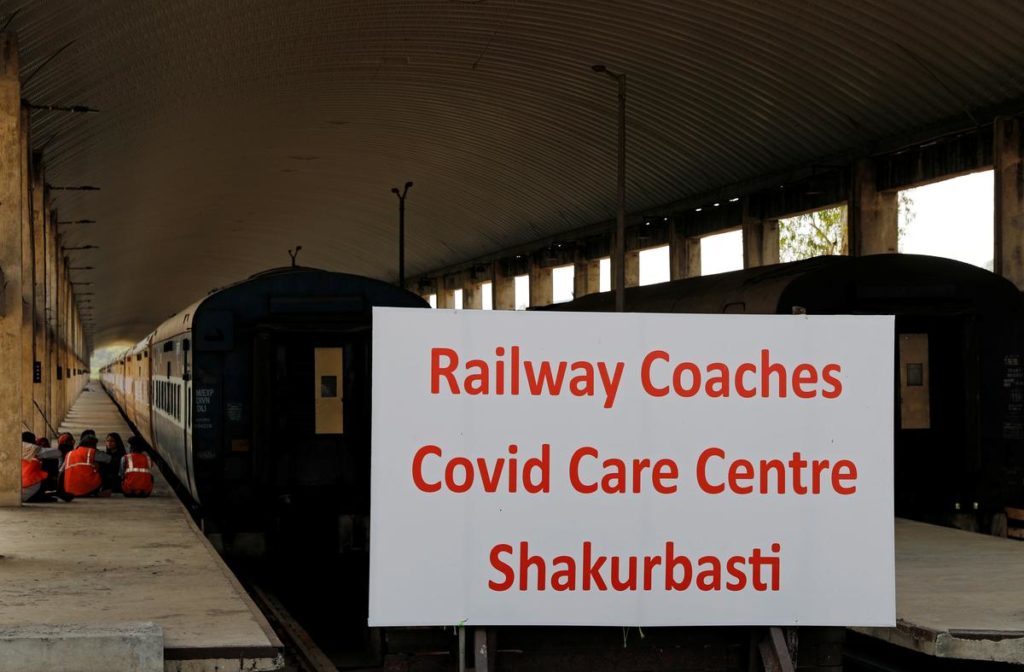 NEW DELHI (Reuters) – India’s capital is fast running out of hospital beds amid a surge in coronavirus cases and is struggling to contain the pandemic, after critics said it did too little to prepare and reopened shopping malls and temples too soon.

Workers sit on a platform next to parked passenger trains that will be equipped for the care of coronavirus disease (COVID-19) patients amidst the spread of the disease, in New Delhi, India, June 15, 2020. REUTERS/Anushree Fadnavis

Some families of people infected with COVID-19 have complained about having to hunt for beds for their relatives after hospitals turned them away.

Others said patients had been left unattended in corridors of government-run hospitals, while local media reports of dead bodies in a hospital lobby prompted the Supreme Court to order the state administration to get its act together.

“I don’t think we expected that cases would rise this much,” said a lawmaker of the Aam Aadmi party that runs the capital, who asked not to be named. “We were so over-confident.”

The office of New Delhi’s Chief Minister Arvind Kejriwal and the city’s health authorities did not respond to requests for comment.

Less than a month ago, Kejriwal said the city’s hospitals were well equipped to fight the virus as the lockdown had given authorities enough time to prepare. “Delhi will win, corona will lose,” he said.

While Delhi had around 10,000 novel coronavirus cases at that time, the number had jumped to 41,000 on Monday. India’s total numbers stood at 332,424, with Delhi, Mumbai and Chennai fueling the rise in infections.

Cases in the capital are set to surge. The government estimates it will have 550,000 COVID-19 cases by the end of July, around 13 times current numbers, and will require 150,000 beds by then.

On Monday a government mobile app showed that of Delhi’s 9,940 COVID-19 beds, almost 5,500 were occupied. Of the 108 private and public hospitals listed in the app, 25 had no beds available.

Anant Bhan, an independent researcher of global health and bioethics, said opening temples and mosques was likely to make more people leave their homes and put lives at risk if proper social distancing protocols were not followed.

The reopenings were decided nationally, but the state of Maharashtra where Mumbai is located, for example, kept restrictions in place to contain the outbreak.

“They (Delhi authorities) probably under-estimated the possibility of a rise of infection and its spread, or the models they used then did not seem to indicate the spread they are seeing now,” said Bhan.

Following harsh words from the Supreme Court, India’s federal government said it would provide 500 railway coaches to be converted into COVID-19 care centers for the capital.

“There should be infrastructure, there need to be beds, patients are not being looked after, this is a deplorable state of affairs,” said Justice M.R. Shah.

The Delhi government has also been criticized for its contact tracing.

The CEO of India’s NITI Aayog federal think-tank said on Twitter that Delhi was tracing just two people for every COVID-19 positive case, compared with Bengaluru city in the south that was tracking 47 contacts for each patient.

Poor resources are part of the problem.

Workers fix mosquito nets on a parked passenger train that will be equipped for the care of coronavirus disease (COVID-19) patients amidst the spread of the disease, at a railway yard in New Delhi, India, June 15, 2020. REUTERS/Anushree Fadnavis

In a small government office atop a dispensary in the East Delhi district, home to 1.7 million of the capital’s 20 million people, only around 10 staff were coordinating tracing contacts when a Reuters reporter visited on Monday afternoon.

As information about 200 new coronavirus cases trickled in, an official complained that the contact tracing teams were already stretched.

“How will we deal with it when there are 400 cases?” the official said. “We will need help.”