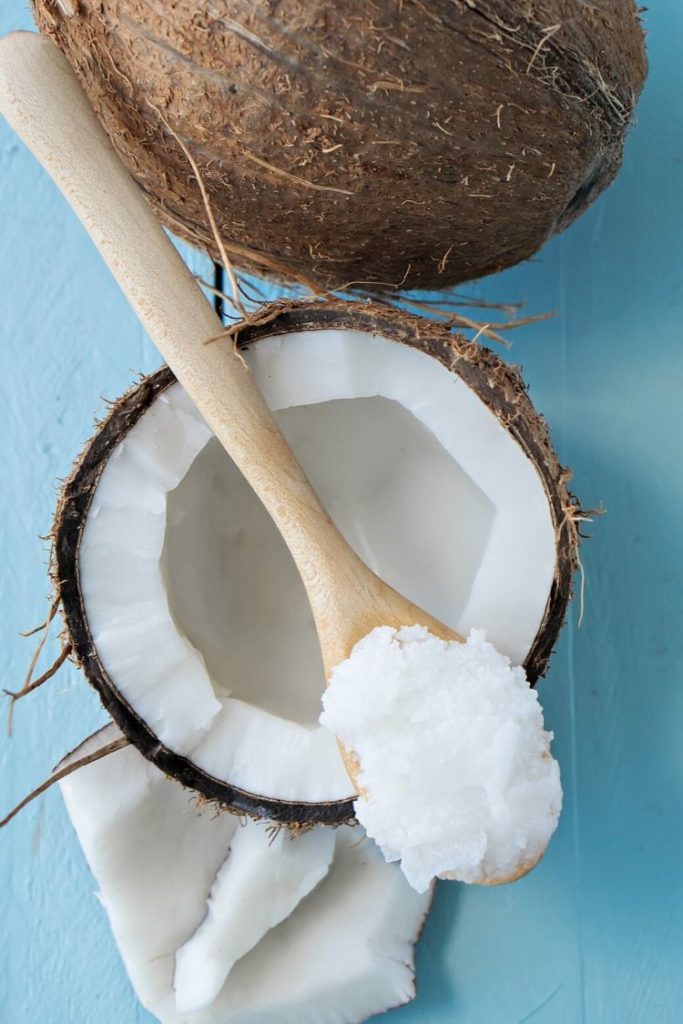 Coconut Oil on a Ketogenic Diet

The ketogenic diet is – in many ways – a 180 turn from the “accepted” diet people have been taught the last 50 years. By turning down the dial on the carbohydrate side of your daily consumption, you can still find yourself losing weight, and improving a fair number of other health markers.

When it comes to the fats that make this diet so popular, however, coconut oil fits in a confusing place. It, too, had gathered a bit of a negative reputation in the last half-century.

Let’s clear that up today. Read on for a tour of the coconut and its oil, better known as coconut or copra oil.

Before we dive into coconut oil’s properties, let’s talk a little bit about the coconut itself.

Coconut comes from Cocos nucifera, the “coconut palm” – believe it or not, just one member of thousands of species of the palm tree.

How is coconut oil harvested and made?

Coconut oil is extracted using a wet or dry method. With the dry process, dried coconuts are pressed or milled to separate the copra (the inner meat or kernel) from the fibrous husk and shell. Then, producers crush the copra, leaving oil plus a mash of copra.

The fibers and copra-mash are usually thrown away or fed to animals, but the oil is refined and processed for human use.

With the wet process, coconut milk – containing both the milk and oil in an emulsion – is treated with a lot of acids and salts before being boiled for a very long time. Eventually, this will produce a rudimentary coconut oil that still has to be centrifuged and further treated before it’s ready for consumption.

MCTs, or Medium-Chain Triglycerides, make up most of the fats in coconut oil.

The most common MCFA in coconut oil is lauric acid, which has 12 carbon atoms. Caprylic acid and capric acid – with 8 and 10 carbon atoms – are also relatively common.

Interestingly, the ‘shorter’ MCFAs between 6-10 carbon atoms per chain are simpler to digest. In many cases, you don’t even need to produce bile to digest them. Lauric acid is the odd one out here, and a portion of it is digested classically.

Besides the MCTs, coconut oil has a fair number of other fats – such as the long-chain fatty acid palmitic acid (16 carbon atom chains).

To some folks, the primary advantage of MCT oil over coconut oil is that MCT oil doesn’t have a distinctive coconut taste and aroma! For this reason alone, some prefer it for culinary use (although note its smoke point is at the lower end, so it’s not the best cooking oil. It’s better used in dishes you don’t need to heat – much).

They aren’t perfect substitutes, of course. Coconut oil, as you saw, has longer-chain fatty acids plus a large concentration of borderline lauric acid. While some proportion of lauric acid is directly absorbed, a fair amount ‘acts’ like a long-chain fatty acid during digestion.

As for other differences?

Interestingly, MCT oil is relatively well studied in the keto diet vs. coconut oil – MCT oil as the primary calorie source is an accepted treatment for seizure control in epilepsy, for example. That same diet shows some initial promise against cancers in pediatric patients.

Another study shows that MCT may increase satiety as compared to coconut oil, which means that you’ll feel fuller after eating less.

On the other hand, coconut oil tends to be significantly less expensive than MCT. It also has a broader range of uses around the house, including in hair and skin care regimens.

Why Might Someone Use it on a Ketogenic Diet?

Some of coconut oil’s health benefits seem to stem from its concentration of MCT oil and might not be a credit to the whole food. Other research, though, does consider coconut oil itself – let’s take a look at both, and you can decide for yourself!

MCTs in Coconut Oil are Beneficial for Insulin Sensitivity

The medium-chain triglycerides found in coconut oil seem to boost your body’s metabolism and improve your insulin sensitivity. Recent studies show a fair amount of benefit of MCTs versus metabolic syndrome.

Research on this subject is still mostly in the preliminary stages, but researchers (and bloggers!) are excited by the possibilities. An insulin-sparing metabolic-syndrome-fighting oil is an excellent ally in the war against metabolic syndrome and closely linked cardiovascular issues.

One of the key factors in developing Alzheimer’s Disease is the accumulation of amyloid-β peptide, which leads to (or at least, makes up) plaque buildup around the brain. Some of the compounds found in coconut oil (yes – our friends the MCTs, but also phenolic compounds and hormones in the oil) can help block this peptide from accumulating in the brain.

While you can’t claim coconut oil can ‘prevent’ a disease, research does suggest that it can significantly reduce the risk of developing a severe neurological disease when combined with the keto diet. If you’ve started the keto diet to boost your mental health, then coconut oil (or its MCT oil cousin) is worth a serious second look.

There are many reasons to go on a diet: heart health, brain health, or just overall physical wellness leaders among many. For a lot of us, however, weight loss and vanity are primary motivators.

Don’t worry – coconut oil has got our back on this front, too!

A 2011 study showed that the study participants who took in regular amounts of coconut oil daily showed a noticeable reduction in adipose tissue – fat – around the waist. For those looking to slim down as we head into the summer, coconut oil may just yet prove to be a secret weapon.

May Reduce Inflammation vs. Similar Intake of Polyunsaturated Fats

Some of the compounds found in coconut oil can help reduce inflammation and keep the blood in your veins flowing strong. A protein called tissue plasminogen activator (tPA, for short) acts on blood clots in your body. Its nemesis, the tPA antigen, is a major predictor of future diabetes and heart conditions.

According to a 2003 study, a diet rich in coconut oil and other natural saturated fats can help reduce the tPA antigen concentration in your bloodstream. It can also reduce the amount of Lipoprotein(a)—Lp(a), a significant risk factor for heart disease and stroke—in the blood, thus presumably keeping your heart safer.

This is one of the most compelling research areas to watch.

Why Might Someone Avoid Coconut Oil on a Ketogenic Diet?

It’s not all roses and heart health, however. Alas, any sober look at an oil requires we also look at some of the downsides.

Unfortunately, coconut oil is still a fat, and it’s a relatively “high-fat” saturated fat. I have to point out: the American Heart Association lists saturated fats (like coconut oil) as compounds to avoid, despite the numerous health benefits associated with a diet rich in MCTs and other purportedly good fats.

Let’s recognize the counterargument, however. A 2016 study concluded that, while saturated fats do have some impact on heart health markers, there isn’t solid evidence that those markers translate to adverse cardiac effects.

The bottom line: we’re going to learn a lot more in the next few years about whether saturated fat has been unfairly maligned.

According to a 2017 study—and many distressed commenters online—eating too much coconut oil in a single day can lead to mild to severe gastrointestinal distress. This can range from constipation and bloating to diarrhea.

In both this and the previous case, it should be noted that health issues arise from an excessive amount of coconut oil.

As with most things, you’ll want to slowly approach coconut oil consumption in moderation, only increasing your intake as you know you can handle it.

Coconut oil has many health benefits, but how does that translate into its use as cooking oil? For the most part, pretty well!

Virgin coconut oil has a smoke point of 350 degrees Fahrenheit (177 degrees Celsius), while its refined cousins stretch it to 400 degrees or slightly higher.

Because of its high saturated fat content, coconut oil is exceptionally resistant to rancidification. This means that it can be stored outside of the refrigerator for up to six months!

If you live in a warmer climate, you may want to store your oil in the fridge anyhow – coconut oil melts at around 78 degrees Fahrenheit (about 25 degrees Celsius). However, the melted oil is still safe to store in the cabinet.

Coconut oil does have a distinctly tropical smell and taste to it. When cooked, some of the taste will go away, but it may still leave a bit of a coconut-y – for lack of a better word – flavor behind. If this bothers you, you can always use MCT oil instead, but note its smoke point is closer to 300 degrees Fahrenheit.

If you’re interested in cooking with coconut oil but don’t know where to start, there are many recipes available online or in traditional cookbooks that should help you find a good jumping-off point.

Here are just two; report back how you like them!

Conclusion: Do You Need Coconut Oil?

Ultimately, you don’t have to eat coconut oil to follow a Ketogenic diet. There are other oils and fats that you can use instead, or you can even choose to skip the cooking oils and get all of your fats straight from the foods that you love.

However, when it comes to the serious health benefits that both “plain” coconut oil and MCT provide, I’m here to argue they’re worth an earnest look. Unless the cabinet above your fridge is seriously overflowing, I’d try to find some space in there…

Gerard Paul writes about food & drink at ManyEats. He’s no hypocrite – at last count, he had three coconut oil jars above the fridge.