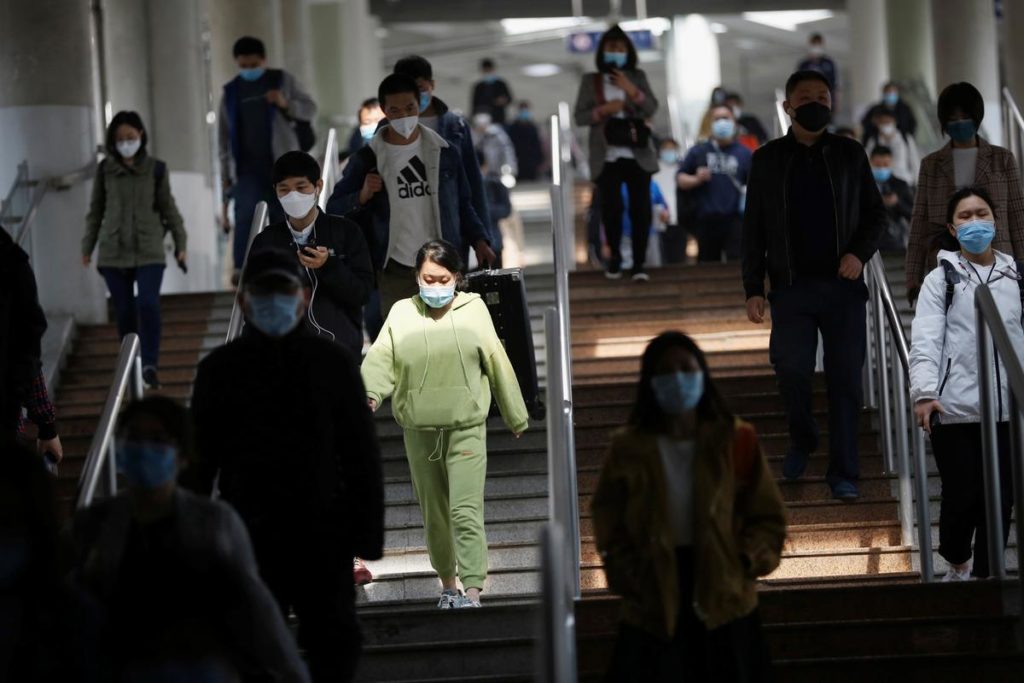 SUIFENHE, China (Reuters) – China has approved early-stage human tests for two experimental vaccines to combat the new coronavirus as it battles to contain imported cases, especially from neighbouring Russia, the new “front line” in the war on COVID-19.

People wearing face masks walk inside a subway train during morning rush hour in Beijing, as the spread of the novel coronavirus disease (COVID-19) continues in the country, China April 14, 2020. REUTERS/Tingshu Wang

Russia has become China’s largest source of imported cases, with a total of 409 infections originating in the country, and Chinese citizens should stay put and not return home, the state-owned Global Times said in an editorial.

“Russia is the latest example of a failure to control imported cases and can serve as a warning to others,” said the paper, which is run by the Communist Party’s People’s Daily.

“The Chinese people have watched Russia become a severely affected country… This should sound the alarm: China must strictly prevent the inflow of cases and avoid a second outbreak.”

China’s northeastern border province of Heilongjiang saw 79 new cases of imported coronavirus cases on Monday. All the new cases were Chinese citizens travelling back into the country from Russia, state media said on Tuesday. They formed the bulk of new cases on the Chinese mainland, which stood at 89.

As China fights to prevent a second wave of COVID-19, two experimental vaccines will be trialed on humans, state media Xinhua reported on Tuesday.

The experimental vaccines are being developed by a Beijing-based unit of Nasdaq-listed Sinovac Biotech (SVA.O), and by the Wuhan Institute of Biological Products, an affiliate of state-owned China National Pharmaceutical Group.

In March, China gave the green-light for another clinical trial for a coronavirus vaccine candidate developed by military-backed China’s Academy of Military Medical Sciences and HK-listed biotech firm CanSino Bio (6185.HK), shortly after U.S. drug developer Moderna (MRNA.O) said it had begun human tests for their vaccine with the U.S. National Institutes of Health.

At a meeting chaired by Premier Li Keqiang on Monday, China’s coronavirus task force decided to deploy more health resources on its borders.

It said it would build hospitals and establish isolation points in border regions, and would also strengthen cooperation with neighbouring countries.

However, officials on Monday acknowledged that China’s long border and its large number of country roads, paths, ferry crossings and mountain passes made it very difficult to control.

To ensure no infected people slip across the Russian-China border, China has put in stringent measures in Suifenhe a small city in Heilongjiang which shares a checkpoint with Russia.

Piao Minghua, deputy head of Harbin customs, which oversees Suifenhe border control, told Reuters that everyone entering Suifenhe has to be tested for the coronavirus, give detailed contact tracing, and then undergo quarantine.

Samples from inbound travellers are taken inside well-ventilated containers set up at the checkpoint so as to minimise cross-infection. Testing is being down round the clock to minimise waiting time.

Though the northeast border remains China’s priority, state media also reported late on Monday that more than 100 people had been arrested in March for illegally entering China through its southwestern border in Yunnan province. Yunnan police have promised to step up controls over the border.

Thousands of people, mostly Chinese workers and traders, were flooding back into Yunnan from Laos and Myanmar earlier this month, putting huge pressures on border regions like Xishuangbanna.

Previous Post Chloroquine COVID-19 Trial Halted After Patient Deaths Next Post Can You Catch Coronavirus From Your Clothes?