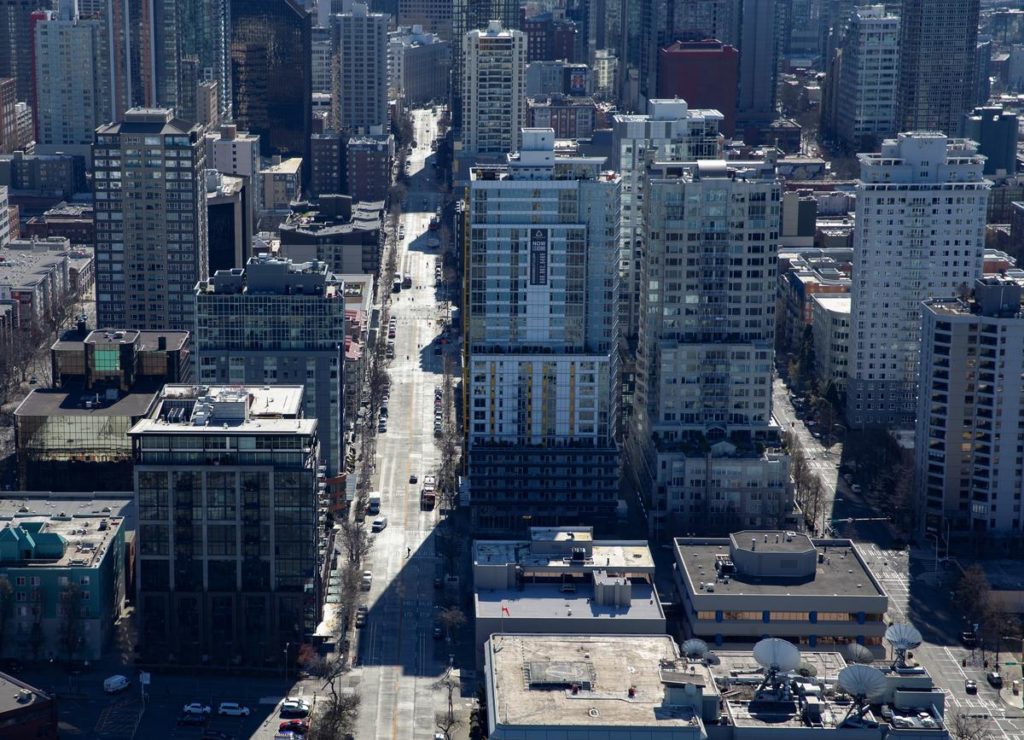 WASHINGTON (Reuters) – Commercial buildings shuttered for weeks to stem the spread of the coronavirus could fuel another grisly lung infection: Legionnaires’ disease.

The downtown streets of Seattle during the outbreak of coronavirus, March 16, 2020. REUTERS/Lindsey Wasson

Public health experts urged landlords across the globe to carefully re-open buildings to prevent outbreaks of the severe, sometimes lethal, form of pneumonia.

The sudden and sweeping closures of schools, factories, businesses and government offices have created an unprecedented decline in water use. The lack of chlorinated water flowing through pipes, combined with irregular temperature changes, have created conditions ripe for the bacteria that causes Legionnaires’ disease, they said.

If diagnosed early, Legionnaires’ disease poses less of a health risk than COVID-19, the disease caused by the new coronavirus. Most cases can be successfully cured with antibiotics, and Legionnaires cannot be spread from human to human contact.

But as communities consider reopening, any commercial facility vacated or underutilized for more than three weeks is at risk for a Legionnaires’ outbreak, unless the water pipes are properly flushed and otherwise sanitized, health experts and government officials say.

“After surviving COVID-19, who wants to open a building and have another set of significant safety issues?” said Molly Scanlon, an Arizona environmental health scientist who is leading a coronavirus task force for the American Institute of Architects. “Our medical system is already under enough stress as it is.”

Those at risk include schools, gyms, factories, hotels, restaurants and outpatient surgical centers, Scanlon said. According to guidance updated Wednesday by the U.S. Centers for Disease Control and Prevention, the threat also applies to hot tubs, water fountains, sprinkler systems and millions of water cooling towers atop commercial buildings.

“It’s a worldwide problem, one that can be solved with precautions,” said British microbiologist Susanne Surman-Lee, who co-drafted reopening guidelines for the European Society of Clinical Microbiology and Infectious Diseases. “Most major corporations with consultants are likely to be aware of the stagnant water systems issue, but this is going to be a challenge for smaller retail-style shops, health clubs and hotels.”

Water and sanitation organizations have joined the call for caution during reopening.

“To be honest, this hasn’t really been part of a business continuity planning on the real estate side of the world,” said Chris Boyd of NSF International, an independent standards organization based in Michigan and formerly known as the National Sanitation Foundation. “Right now, very few companies are thinking through how water systems factor into their continuity and reopening efforts. They’ve never had to deal with such low occupancy.”

Legionnaires’ disease, a pneumonia named after a deadly 1976 outbreak at an American Legion convention in Philadelphia, is the chief waterborne illness in the United States. Nearly 50,000 people were infected between 2000 and 2015, according to the CDC.

People with Legionnaires’ disease develop pneumonia. Healthy people usually recover, but often require hospitalization and antibiotics to treat the lung infection. About one in 10 die, according to the CDC, but among those who get Legionnaires’ during a hospital stay, one in four do not survive.

After a 2015 Legionnaires’ outbreak in which 10 New Yorkers died and at least 100 people became ill, the city began regulating water cooling towers, the suspected culprit. The same year, 12 deaths in Flint, Michigan were linked to a Legionnaires’ disease outbreak, after officials switched the city’s water source from a lake to a river without taking proper precautions.

Legionnaires’ disease infects people when legionella bacteria is disseminated into the air as an aerosol from water sources, such as hot tubs, showerheads, fountains and industrial water cooling systems.

The threat from Legionnaires’ disease is compounded, some experts said, because its victims tend to display the same symptoms as coronavirus patients, including cough, chills and fever, making misdiagnosis a possibility.

A recent paper published by Chinese doctors in The Lancet found that 20 percent of coronavirus patients also had Legionnaires’ disease.

In a paper for the International Society of Travel Medicine, Japanese doctors wrote of an 80-year-old man who died shortly after returning from a Nile cruise in March. He was infected with both legionella and coronavirus. Although doctors could not determine which he caught first, they noted that legionella has been linked to cruise ships, not hospitals.

“Our case, although fatal, highlights the importance of differential diagnosis during the current COVID-19 epidemic, so we do not miss the opportunity to diagnose other treatable causes of disease with similar symptoms,” the doctors wrote.

Dr. Xiang-Yang Han of the University of Texas Anderson Cancer Center, who has long studied Legionnaires disease, said he is less worried about misdiagnoses and more concerned about prevention and planning as communities reopen.

“We can not relax, even with the manpower shortage,” Han said. “Do we have enough manpower to flush every facility? Of course, I’m concerned. People are eager to get their businesses running, but these are highly technical jobs and people need to know what they are doing.”

Han said that anyone servicing water pipes before a reopening should take the same precautions as one might to prevent the spread of the coronavirus: wear gloves and a mask.

Steve Via of the American Water Works Association, which represents utilities, scientists and academics, said small business owners in particular should be vigilant. Any device dormant during the shutdown and connected to the water system should be flushed.

“It’s not the landlord’s responsibility to check things like the ice machine, the soda machine, those kinds of things, but they’ve been sitting there for a long time,” Via said. “What we need to be doing is just getting people to start thinking about this as if you went to a house that you used as a summer place — when you open it up, you have a protocol you follow.”

Via added, “People don’t need to be frightened about this, but they do need to be thoughtful.”