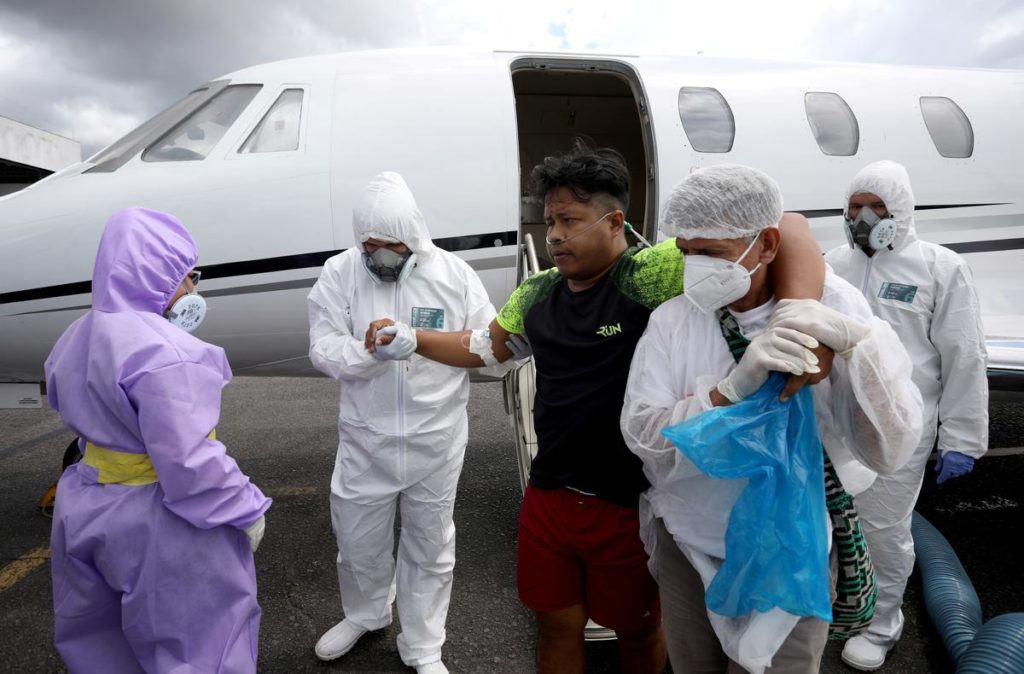 MANAUS (Reuters) – The novel coronavirus is spreading so fast among the indigenous people in the furthest parts of Brazil’s Amazon rainforest that doctors are now evacuating critical COVID-19 patients by plane to the only intensive care units in the vast region.

“The number of COVID-19 patients has increased a lot. We are flying more planes (up the rivers); it’s the last opportunity to save their lives,” said Edson Santos Rodrigues, a pediatric doctor working on medevac planes for the state of Amazonas.

“Sometimes we don’t get there in time, because we cannot land at night on remote airfields that have no lights,” he said as he returned to the city of Manaus with a 26-year-old man of the Tikuna tribe, who was breathing through an oxygen tank aboard the plane. Manaus, the capital city of Amazonas, has some of the only intensive care units in the region.

The Brazilian government’s indigenous health service Sesai reported on Monday at least 23 indigenous people have died from COVID-19, the deadly illness caused by the coronavirus. The victims were in remote tribal territories, 11 of them in the upper reaches of the Amazon river bordering Colombia and Peru.

Brazil’s main tribal umbrella organization APIB counts the coronavirus cases of indigenous people who have migrated to urban areas and who are not treated by Sesai. The group reported on Monday a rise in the death toll with 103 confirmed deaths, up from 18 on April 3.

Three-quarters of the 540 confirmed cases of coronavirus among 40 tribes reported by APIB are in the Amazon where the pandemic has hit Manaus so badly that it was the first Brazilian city to run out of ICU beds, while its main cemetery buries the dead in collective graves.

On Monday, a seriously ill 78-year-old patient on a ventilator died on the flight from São Gabriel da Cachoeira, the mostly indigenous town in the Amazon located on the Rio Negro near the border with Venezuela, said Daniel Siqueira, a medevac doctor.

Siqueira, the son of an evangelical missionary, spent his childhood in an indigenous village in the Amazon and speaks the most common indigenous language in the region, Nheengatu. Speaking to critical patients in their own language is important, he says.

The epidemic may have begun in the city, but it’s worsening in the remote regions, he added. “Towns must isolate and stop the virus from reaching the indigenous villages or many more will die,” he said.