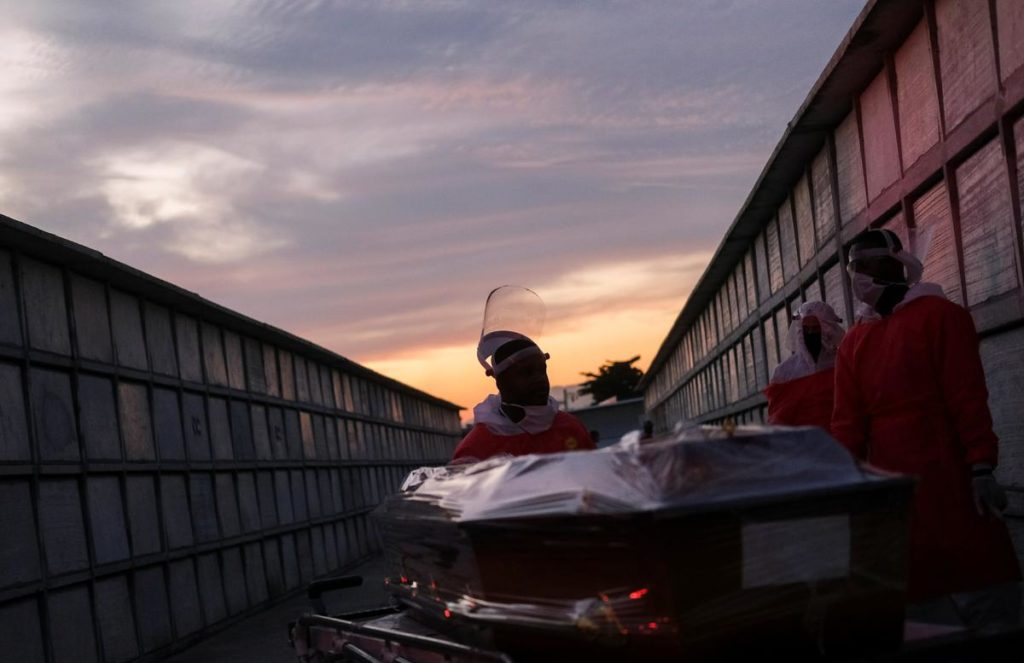 Gravediggers prepare the coffin of Antonio Marciano, 65, who is suspected to have passed away from the coronavirus disease (COVID-19), during his burial in Duque de Caxias public cemetery, near Rio de Janeiro, Brazil May 5, 2020. REUTERS/Ricardo Moraes

RIO DE JANEIRO (Reuters) – Brazil hit a record for daily coronavirus deaths on Tuesday, indicating that the nation is still in the thick of its battle against the virus, even as some areas of the country are beginning to open up.

According to the Health Ministry, there have been 6,935 new cases of the novel coronavirus in Brazil since Monday evening and 600 new deaths. The previous record of 474 deaths came on April 28.

The nation has now tallied 114,715 confirmed cases of the virus and 7,921 deaths, the ministry said, making it by far the hardest-hit country in Latin America. New cases increased roughly 6.4% from Monday evening, while deaths increased roughly 8.2%.

The states with the most cases in descending order are Sao Paulo and Rio de Janeiro in the southeast and Ceara in the northeast, where capital city Fortaleza will enter a full lockdown on Friday.

In comments to reporters on Tuesday evening, Health Ministry Subsecretary Wanderson Oliveira emphasized that new deaths had not necessarily occurred since the previous day, but were officially recognized during that time period. He said there are over 100,000 tests conducted by private labs that have not been officially registered by the government.

Previous Post With Many States Reopening, Coronavirus Testing Levels Still Too Low, Experts Say Next Post Running Without Risk During the Pandemic