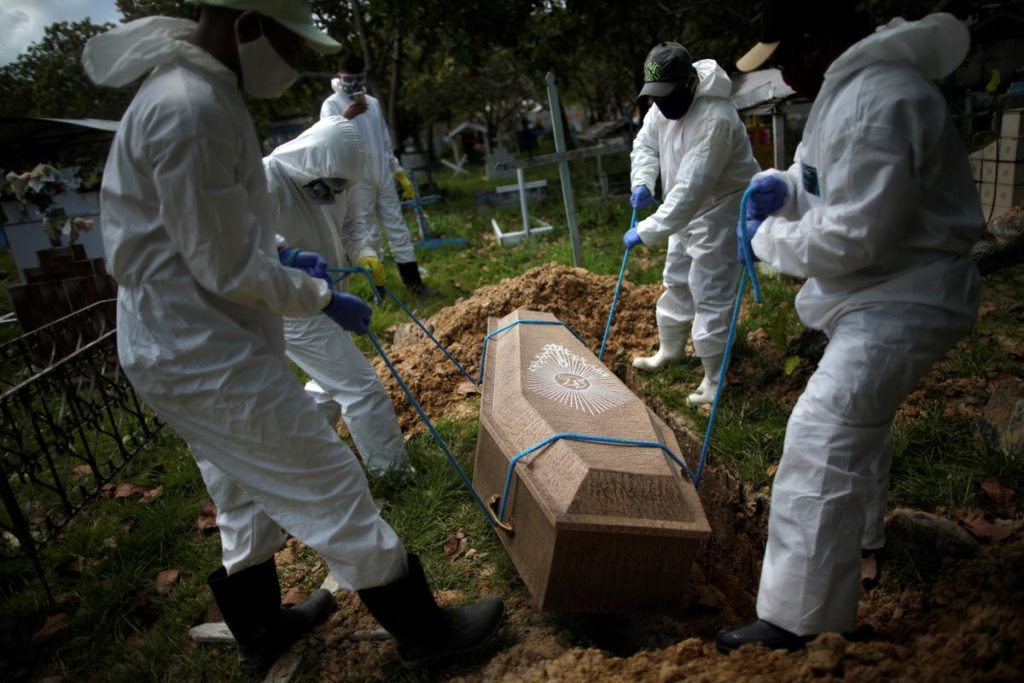 RIO DE JANEIRO/SAO PAULO (Reuters) – Brazil drew further criticism for its handling of the coronavirus pandemic on Monday after it published contradictory figures on fatalities and infections, deepening a scandal over the country’s COVID-19 data.

The discrepancy prompted criticism from across the political spectrum as a senator called for a congressional inquiry.

Initial health ministry data released on Sunday on Brazil’s number of cases and death toll was contradicted by numbers uploaded to the ministry’s online data portal.

On Monday, the ministry said in a statement the discrepancy was predominantly due to mistakes in the numbers from two states that were later corrected. It explained that the later, lower daily death toll of 525 was the correct one.

The discrepancy followed recent decisions to remove from a national website a trove of data about the country’s outbreak, and to push back the daily release of new numbers late into the evening and after the country’s main television news program.

“By changing the numbers, the Ministry of Health covers the sun with a sieve,” Rodrigo Maia, speaker of the lower house, said on Twitter.

“The credibility of the statistics needs to be urgently recovered. A ministry that manipulates numbers creates a parallel world in order not to face the reality of the facts,” he added.

Senator Eliziane Gama, leader of centrist party Citizenship, asked the Senate to open an inquiry into the numbers, while the World Health Organization (WHO)stressed the importance of “consistent and transparent” communication from Brazil. It ranks second in confirmed cases, behind the United States, and its death toll last week surpassed Italy’s.

Brazil could see COVID-19 deaths rise to 165,960 by August, above the forecast for the United States which has 100 million more people, according to a new projection by the University of Washington’s Institute for Health Metrics and Evaluation.

The updated forecast suggests Brazil’s epidemic could become the most lethal globally.

For Carlos Machado, head of research at the National School of Public Health, part of the respected public institute Oswaldo Cruz Foundation, the lack of dependable data in Brazil is dangerous.

“Not having updated and reliable data during a pandemic of this proportion is like driving in the dark,” he said.

“While we do not have a vaccine, information is the best weapon we have,” he added.

Confusion over the figures has led a group of Brazil’s largest media outlets to launch their own data tracking system, according to a report in newspaper Folha de S.Paulo.

The National Council of Health Secretaries (Conass), which brings together the heads of Brazil’s state health departments and is separate from the health ministry, has also created its own platform.

According to the council, Brazil had recorded 680,456 cases of COVID-19 and 36,151 deaths from the disease by the end of Sunday afternoon.