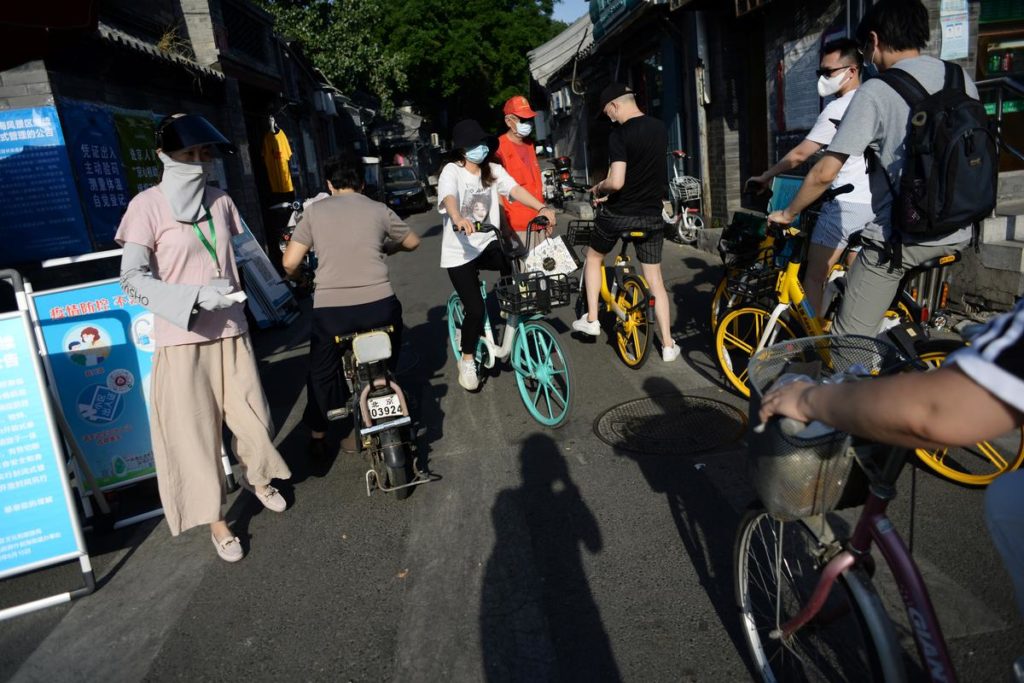 BEIJING (Reuters) – Officials cancelled scores of domestic flights in and out of Beijing on Wednesday as they ramped up attempts to contain a coronavirus outbreak in the Chinese capital over the past week that has sparked fears of renewed wider contagion.

FILE PHOTO: A woman holds a thermometer at a checkpoint set up at an entrance to a hutong, following new cases of the coronavirus disease (COVID-19) infections, in Beijing, China June 16, 2020. REUTERS/Tingshu Wang/File Photo

Health officials recorded 31 new confirmed infections for June 16, bringing the cumulative infections since Thursday to 137 cases, the worst resurgence of the disease in the city since early February.

Aviation data tracker Variflight showed that half the scheduled inbound flights and 40% of outbound flights from Beijing Capital International Airport, one of the city’s two major airports, have been or will likely be cancelled on Wednesday. The majority of the flights are domestic routes, with direct international flight routes banned three months ago when the city was grappling with the first wave of infections.

Authorities on Tuesday raised Beijing to a level two alert, the second-highest level in a four-tier COVID-19 emergency response level system. That reversed a one step downgrade from level two to level three a mere 10 days earlier.

Some 27 neighbourhoods have been designated as medium-risk areas, subjecting people entering to temperature checks and registration, as of Tuesday. One neighbourhood, near the massive wholesale food centre detected as the source of the latest outbreak, was marked high-risk.

Under the level two restrictions, the city’s roads and highways were still open, companies and factories were not ordered to stop work, and there was no blanket curb on residential compounds.

However, movement of people in and out of the city was strictly controlled and subject to COVID-19 tests, while residents in high-risk areas were quarantined in their neighbourhoods and also required to undergo tests. Kindergartens, primary schools and high schools were all shut.

The outbreak has been traced to the massive Xinfadi wholesale food centre in the southwest of Beijing where thousands of tonnes of vegetables, fruit and meat are traded each day.

The new coronavirus was first identified in December at a seafood market in Wuhan, capital of the central Chinese province of Hubei, and has since spread around the world, infecting more than 8 million people.

State media has cited experts as saying the latest outbreak in Beijing was different from Wuhan because the cases were localised and the source of the infection was clear, allowing authorities to more easily get the situation under control.

However, Hebei, Liaoning, Sichuan and Zhejiang provinces have all reported new cases linked to Xinfadi, leading provinces concerned about contagion to impose quarantine requirements on visitors from Beijing.

Northeastern Heilongjiang province, which only recently brought a local outbreak under control, said it will impose 21 days of quarantine on people who have had contact with Xinfadi or have a history of residence in medium to high risk areas in Beijing.

Heilongjiang said it will also require any other travellers from Beijing to quarantine at a centralised location for up to three days, followed by another 14 days of self-isolation.