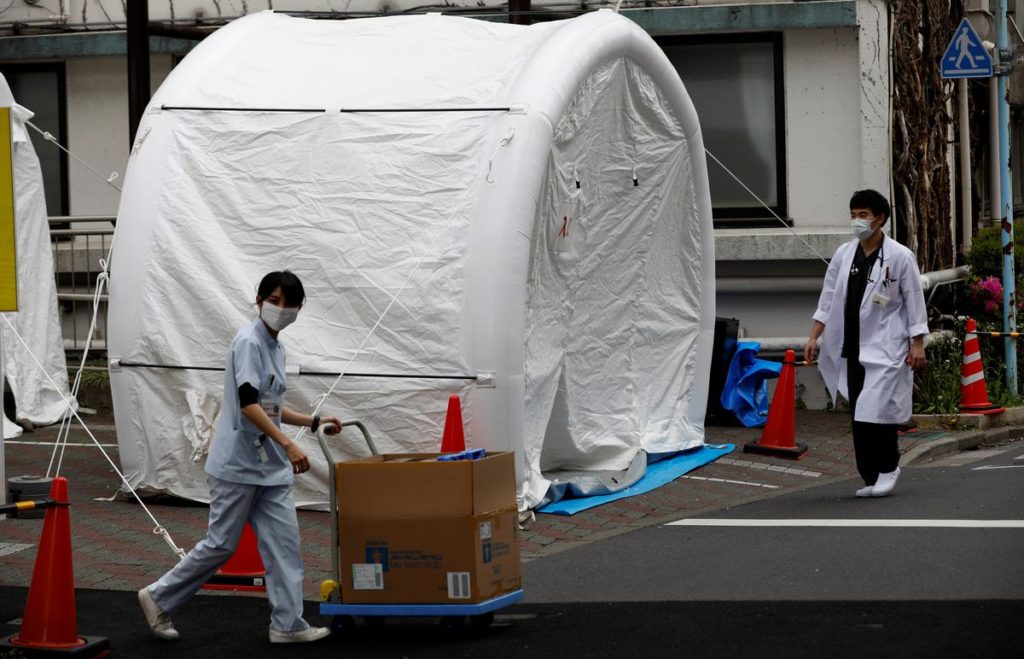 TOKYO (Reuters) – Japan, alarmed by rising coronavirus deaths and the specter of the collapse of the medical system, is scrambling to expand testing with drive-through facilities and general practitioners helping to collect samples.

For weeks Japan has limited its testing for the coronavirus, which emerged in neighboring China late last year, despite calls from many health experts who see testing as vital to detecting and isolating cases and slowing the spread.

Japan conducted about 52,000 polymerase chain reaction (PCR) tests in March, or just 16% of the number carried out in South Korea, according to data from Oxford University.

Experts say Japan’s strategy of keeping the number of PCR tests low has made it difficult to trace the disease as it spread in Tokyo and other big cities and led to a wave of in-hospital infections, crippling some facilities.

The decision to expand testing came as Prime Minister Shinzo Abe this week expanded a state of emergency, originally issued for Tokyo and six other areas, to the entire country, and warned of the growing burden on health facilities.

“With help from regional medical associations, we will set up testing centers. If home doctors have decided testing is necessary, test samples are taken at these centers and sent to private inspection firms,” Abe told a news conference on Friday.

“Thus, the burden on public health centers will be lessened.”

While the measures marked a shift in policy, it remains to be seen how effective they will be, experts say, as Japan struggles with red tape, staff shortages and the absence of centralized decision-making with no single agency coordinating the response to the disease.

There has been widespread criticism that phone lines for public health centers, set up by local governments and tasked to conduct screening for PCR test candidates, are always busy as people become more worried about infection.

Tokyo remains the hardest-hit place in Japan, with a record 201 additional cases reported by its governor on Friday, for a total of 2,796.

Japan’s total infections stand at more than 9,800, with 207 deaths, according to a tally by public broadcaster NHK.

As part of effort to boost testing capacity, several general practitioners’ groups in Tokyo have stepped up to shoulder the task of examining potential patients and taking test samples from them, which is now conducted mainly by doctors working at large hospitals, who are already overstretched.

“This is to prevent the medical system from crumbling. Everyone needs to extend a helping hand. Otherwise, hospitals would break down,” said Konoshin Tamura, deputy head of an association of general practitioners in Tokyo’s Suginami ward.

“Also, in order for PCR tests to be conducted more widely, we need to get used to the whole process and see what the coronavirus really does,” said Tamura, who runs a clinic specializing in internal medicine and pediatrics.

On the grounds of one of the four Suginami hospitals where general practitioners are taking turns to see suspected coronavirus patients, two white tents were put up this week in anticipation of more virus-related visits.

In another bid to make PCR tests more available, the health ministry on Wednesday suggested to local governments that drive-through tests can bolster their capabilities.

Kenji Shibuya, head of the Institute for Population Health at King’s College, London, and other scientists, have repeatedly said since early in the outbreak that Japan should introduce the type of drive-through testing that South Korea has.

A day after the health ministry’s advice, the city of Chiba, east of Tokyo, launched drive-through testing, and several others are looking to follow suit.

“It’s quite clear we will be seeing more and more patients who need testing. This is one of our ways to expand,” a Chiba official said.

Previous Post Dogs May be Able to Detect COVID-19: Researchers Next Post New COVID-19 Test Could Give Results in Under 1 Hour