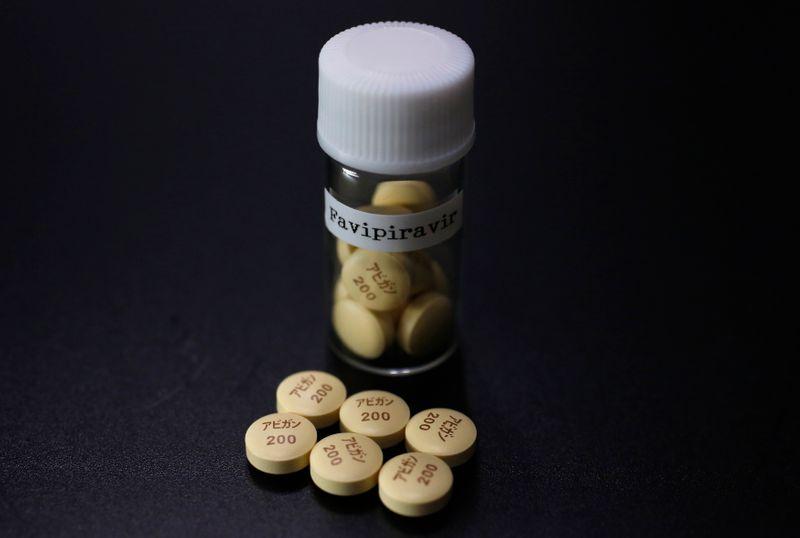 FILE PHOTO: Tablets of Avigan (generic name : Favipiravir), a drug approved as an anti-influenza drug in Japan and developed by drug maker Toyama Chemical Co, a subsidiary of Fujifilm Holdings Co. are displayed during a photo opportunity at Fujifilm’s headquarters in Tokyo October 22, 2014. . REUTERS/Issei Kato

By Rocky Swift and Christine Soares

TOKYO (Reuters) – In the global hunt for coronavirus treatments, a Japanese antiviral medicine known as Avigan has won plaudits from Prime Minister Shinzo Abe and $128 million in government funding.

But it’s not the only game in town.

Camostat, a 35-year old pancreatitis drug made by Osaka-based Ono Pharmaceutical Co, has captured the interest of scientists in Japan and overseas with little fanfare or state assistance.

The two compounds are among dozens undergoing testing around the globe and illustrate how the race to develop treatments and vaccines is still wide open despite politicians such as Abe and U.S. President Donald Trump promoting the potential benefits of certain drugs.

Gilead Science Inc’s remdesivir has pulled into the lead after promising early trial results prompted emergency approval in the United States and Japan. While remdesivir has shown promise in reducing recovery times of hospitalised patients, the search continues for additional treatment options.

Interest in Avigan soared in March after a Chinese official said that it appeared to help patients recover from COVID-19, the flu-like infection caused by the coronavirus. It is now the subject of at least 14 clinical trials. Amidst a global rout in stocks, shares in Fujifilm have shot to record highs.

Abe has called for Avigan to be approved for use by the end of this month if these trials are effective – unprecedented speed, particularly for a drug known to cause birth defects.

Abe’s administration has pledged to give away free supplies of the drug, with some 43 countries making formal requests. Fujifilm chairman Shigetaka Komori is a longtime backer of Abe, though the cabinet has denied there is any connection between their relationship and the government’s promotion of Avigan.

The use of Avigan is decided by doctors and its approval will depend on medical and scientific evaluation in due course, said Fujifilm spokeswoman Kana Matsumoto.

“The use of Avigan has nothing to do with the relationship between the Prime Minister and any particular company,” she said.

Avigan, known generically as favipiravir, was developed in the late 1990s by a company that was later purchased by Fujifilm as part of its transition from photo businesses to healthcare. The drug works by short-circuiting the reproduction mechanism of certain RNA viruses such as influenza.

Avigan can be taken as a pill, which would make it more accessible than Gilead’s remdesivir, currently administered only as an intravenous infusion. But the mechanism that makes Avigan effective against viruses also makes it destructive to the rapid cell growth of fetuses.

After being tested against a range of viruses, Avigan was finally approved in Japan in 2014, but only for emergency use against flu epidemics, and it was licensed in China where it has since gone off patent.

Also clinically unproven is a camostat mesylate. Developed by Ono Pharmaceutical, most famous for its blockbuster Opdivo cancer drug, camostat is a protease inhibitor that has been used primarily to treat pancreatitis and some types of cancer.

But past laboratory and animal tests against SARS-CoV-1 showed it has antiviral functions, and it can be safely administered in high enough doses to match the concentrations that were effective in the lab.

A study published in the scientific journal Cell in March found that camostat blocks an enzyme essential for the entry of the coronavirus into the lungs, drawing researchers’ interest. One of them was Dr. Joseph Vinetz, a professor at the Yale School of Medicine, who is ready to launch a clinical trial of camostat.

“It’s got a 35-year track record, so it seemed to be a very safe drug,” he said. “I said we’ve got to try it. I’m a physician and we’re desperate for anything we can give to people.”

Vinetz is still trying to raise money for the trial.

“I’m 100% certain that we needed to start this trial a month ago. And we can have a definitive result in a month.”

Ono launched camostat, known commercially in Japan as Foipan, as a treatment for chronic pancreatitis in 1985 and postoperative reflux esophagitis in 1994. The company is now supplying the drug for COVID-19 studies in Japan and overseas, according to spokesman Yukio Tani.

Itzchak Levy at the Sheba Medical Center in Israel launched a self-funded camostat trial in April. “Up to now we recruited 14 patients and look forward to further recruitment,” Levy said.

Other clinical trials are testing whether camostat can inhibit the virus’s preferred pathway into human cells, and with hydroxychloroquine – the malaria drug touted by Trump – also block the back door, boosting the treatment’s effectiveness.

Existing science behind camostat’s mechanism of action and tolerance in patients “is why we were enthusiastic about its potential,” said Elijah Kakani, who is conducting a clinical trial on camostat alone at the University of Kentucky. “However, at this point we need to temper our enthusiasm and be objective in our evaluation of this medication for the problem at hand.”